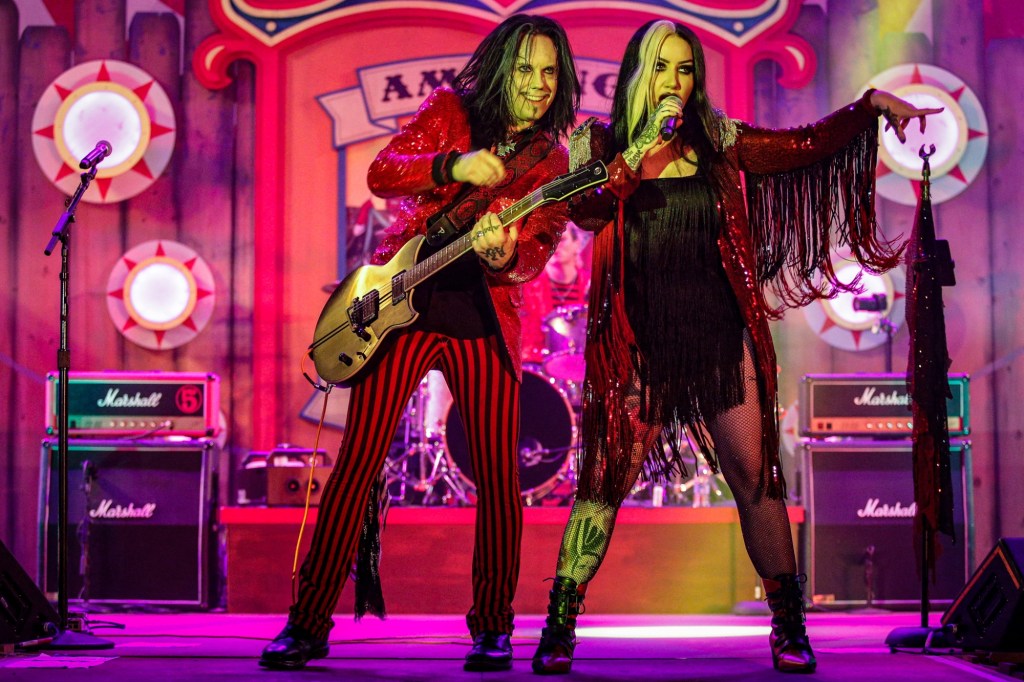 After Knott’s Halloween residency, The Haxans are back with new music and live gigs – Orange County Register

Musicians Ashley Costello and Matt Montgomery bonded over a shared love of Huey Lewis and the news, 80s Bugs Bunny and the macabre.

The couple, who met almost ten years ago, knew they wanted to try writing music together, but at the time they were busy with other projects.

Montgomery was on tour with rocker and horror filmmaker Rob Zombie’s band, where he is known as bassist Piggy D, and Costello fronted his Anaheim-based rock band, New Year’s Day.

But their creative chemistry was undeniable and when things finally slowed down a few years later, they formed Goth-pop group The Haxans. They took the time to escape the studio, or the lab as they call it, to bring their monster Frankenstein to life. Having taken a break from other musical endeavors this year, the band are on the road to opening up to fellow Zombie player, guitarist John 5 and his band The Creatures. The ride stops at Garden Amp in Garden Grove on April 22 and Brick By Brick in San Diego on April 24.

“Crazy people get together and they stay together,” Costello said in a recent Zoom interview. “You relate to these things that maybe weren’t considered cool in the past, but are now a little more accepted. At one point, living Halloween every day made you laugh at yourself and love movies of horror got you called “weird.” So when you find those people, when you find yours, you stick with them.

The Haxans released their debut album, “Party Monsters,” in 2017. Although they released spooky music videos and a terrifying line of merchandise, they had scheduling conflicts that kept them from touring. They played their first live concert of 2019 at the Viper Room in West Hollywood, just before the New Year and the COVID-19 pandemic.

Montgomery and Costello had written so much for the first album that they already had their as-yet-unreleased second album in the box; they were preparing to shoot in 2020 when the pandemic canceled in-person events. They took advantage of the time and returned to the studio to record more songs, including a cover of David Bowie’s “Scary Monsters (And Super Creeps)”. They also fleshed out an original song, “All the Roses,” a revenge ballad inspired by the roses that bloom around the Pasadena studio.

“Pasadena is kind of a magical place,” Montgomery said. “’All the Roses’ was written in 15 minutes. I can’t take credit for this song because it fell from the sky. It was educational in the sense that wow, it’s something that can affect your process. Just walk around the neighborhood and see roses every day, which bloom all the time. It seeped into the blood and that’s it.

When Halloween events returned to in-person events in 2021, the Haxans were invited to be the resident spooky band at Knott’s Berry Farm in Buena Park. They were part of Carnival De Grotesque on The Calico Mine stage and played four 30-minute sets per night for 15 days.

“We went from a single show to a residency at Knott’s…who does that?” Montgomery asked with a laugh. “We’re not a cover band, but we learned about 50 songs to get through those gigs. We were playing 45-50 songs a night and that’s not even normal behavior for touring bands, let alone two morons like us who had only played one gig.

For Costello, the residency was more personal. Growing up in Orange County, she had spent her childhood at Knott’s Berry Farm. She attended Knott’s Halloween event every year and said she loves horror-themed mazes and saw her idol, Elvira Mistress of the Dark, perform her variety show live at the Charles M. Schulz Theater.

“It’s a coveted event in my heart, so I wanted to do it with pride,” she said. “I had the added weight and pressure of not embarrassing the thing I loved so much, but we got through it well and it was a lot of fun.”

This residency allowed the performers to shed the cobwebs and prepare for the large amount of touring and horror convention appearances they are currently doing. Although it’s taken them a while to really get going, The Haxans are full steam ahead into 2022 and will release their second album, “The Dead & Restless,” on October 7.

“I always wanted to be in a band that had no rules,” Montgomery said. “It’s been so cool and unlike anything I’ve ever done or even attempted to do. As close as I get, it’s a very weird project with a weird impulse of its own and it simply cannot be killed.