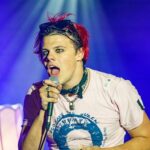 yungblud fans will get to see their idol live up close and personal in Brighton thanks to Resident music who have, in collaboration with local promoters One thumb badgeorganized a performance outstore at Chalk in support of his upcoming self-titled album, which is slated for release September 2.

For those of you who don’t know, Yungblud is the alter ego of Dominic Richard Harrison, 24, born in Doncaster. To date, he has released two studio albums, one live album, seven EPs, twenty-nine singles (including one as a featured artist) and twenty-seven music videos. His twelve tunes ‘Weird!’ The album was released on December 4, 2020, which is at the height of the Christmas buying frenzy and yet it burst onto the album chart and went to No. 1 selling 39,000 units at the during its first week only. It has so far spawned no less than six singles.

As an additional push, the ‘Weird!’ The album was available in a number of formats, including white vinyl, white cassette, and CD. ‘Weird!’, with its cover made to imitate the movie poster ‘This is England’, is very difficult to categorize as it clearly covers punk, pop, emo, metal, rap and rock. Yungblud publicly states that his inspirations come from artists such as My Chemical Romance and Marilyn Manson.

Before beginning his musical career, Yungblud appeared in Emmerdale and The Lodge. He admitted he suffers from insomnia and ADHD, but that certainly didn’t hold him back as he is clearly hugely popular, with no less than 3.7 million Instagram followers.

Tickets for his Brighton concert at Chalk will go on sale at 9am tomorrow (July 1) on the Resident website. Choose your purchase options HERE.