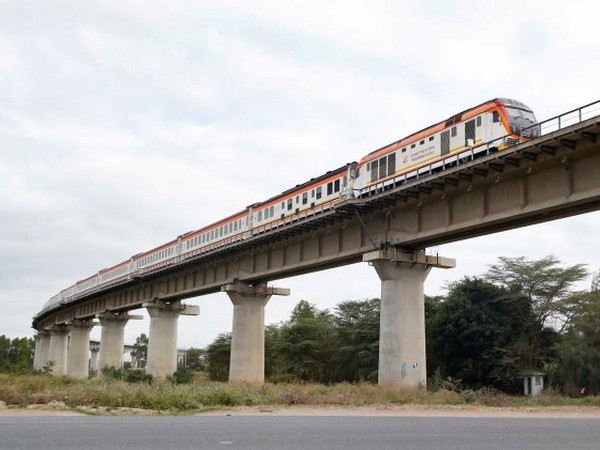 Nairobi [Kenya]Oct 15 (ANI): Chinese banks fined Kenya 1.312 billion Kenyan shillings in the year ending June for defaulting on loans made to build the railway in standard gauge (SGR), according to Treasury documents seen by Business Daily Africa.
SGR recorded an operating loss of 3.4 billion shillings and wired 22.7 billion shillings in loan repayments in the year to June.
Kenya has raised more than half a trillion shillings from Chinese lenders, led by the Export-Import Bank of China, to finance the construction of the Mombasa SGR in Naivasha.
“This (1.312 billion shillings) relates to the cost of default on interest at one per cent of the amount due,” the briefing documents seen by Business Daily Africa said.
Taxpayers have been forced to shoulder the burden of SGR loans because revenues generated from passenger and freight services on the track are not enough to cover operating costs, which amounted to 18.5 billion shillings for the year to June against sales of 15 billion shillings. , Business Daily Africa reported.
The default came a year after Kenya requested an extension of the moratorium on debt repayments to bilateral lenders, including China, for another six months until December 2021, saving it from committing billions to lenders. from Beijing.
But lenders, particularly the Exim Bank of China, have resisted Kenya’s request for a debt repayment holiday amid an impasse that has delayed disbursements to projects funded by Chinese loans, Business Daily reported. Africa.
China, which accounted for about a third of Kenya’s external debt servicing costs in 2021-22, is the country’s largest foreign creditor after the World Bank.
Kenya spent a total of 117.7 billion shillings on Chinese debt during the period, including around 24.7 billion shillings in interest payments and nearly 93 billion shillings in repayments, budget documents show. .
Repayment of the SGR loan began in January 2020 after the expiry of a five-year grace period that Beijing had granted Kenya.

The default underscores Kenya’s financial distress over fast-maturing debts that have deeply eaten up tax revenues and cut funds for development projects, Business Daily Africa reported.
The administration of former President Uhuru Kenyatta took out loans largely from China starting in 2014 to build roads, bridges, power stations and the SGR.
The financing agreement for the first phase of the SGR, Kenya’s largest infrastructure project in terms of cost since independence, saw China overtake Japan as Kenya’s largest bilateral lender.
Kenya’s debt more than quadrupled to 8.580 billion shillings under the Kenyatta administration.
According to the International Monetary Fund (IMF), the surge in liabilities has exposed the country to a high risk of debt distress.
Kenya spent almost 57% of its tax revenue in the past financial year on loan repayments, according to the Treasury, highlighting the effects of rising public debt on state finances.
The terms of China’s loan agreements with developing countries are unusually secretive and require borrowers to prioritize repayment to Chinese state-owned banks over other creditors.
The dataset – compiled over three years by AidData, a US research lab at the College of William & Mary – includes 100 Chinese loan deals with 24 low- and middle-income countries, a number of which are struggling with debt. growing amid the economic fallout from the Covid-19 pandemic, Business Daily Africa reported.
He revealed several unusual features, including confidentiality clauses that prevent borrowers from revealing the terms of loans, informal collateral agreements that benefit Chinese lenders over other creditors, and promises to keep debt out of collective restructurings – described by the authors as “no betting” club clauses.
The Paris Club is a group of officials from major creditor countries whose role is to find solutions to the payment difficulties of debtor countries.
Last month, President William Ruto reversed one of the most controversial policies of the previous administration which made it compulsory to clear goods through inland container depots in Nairobi and Naivasha, Business Daily Africa reported. (ANI)

Good Vibez Festival – first of its kind in North Nashville