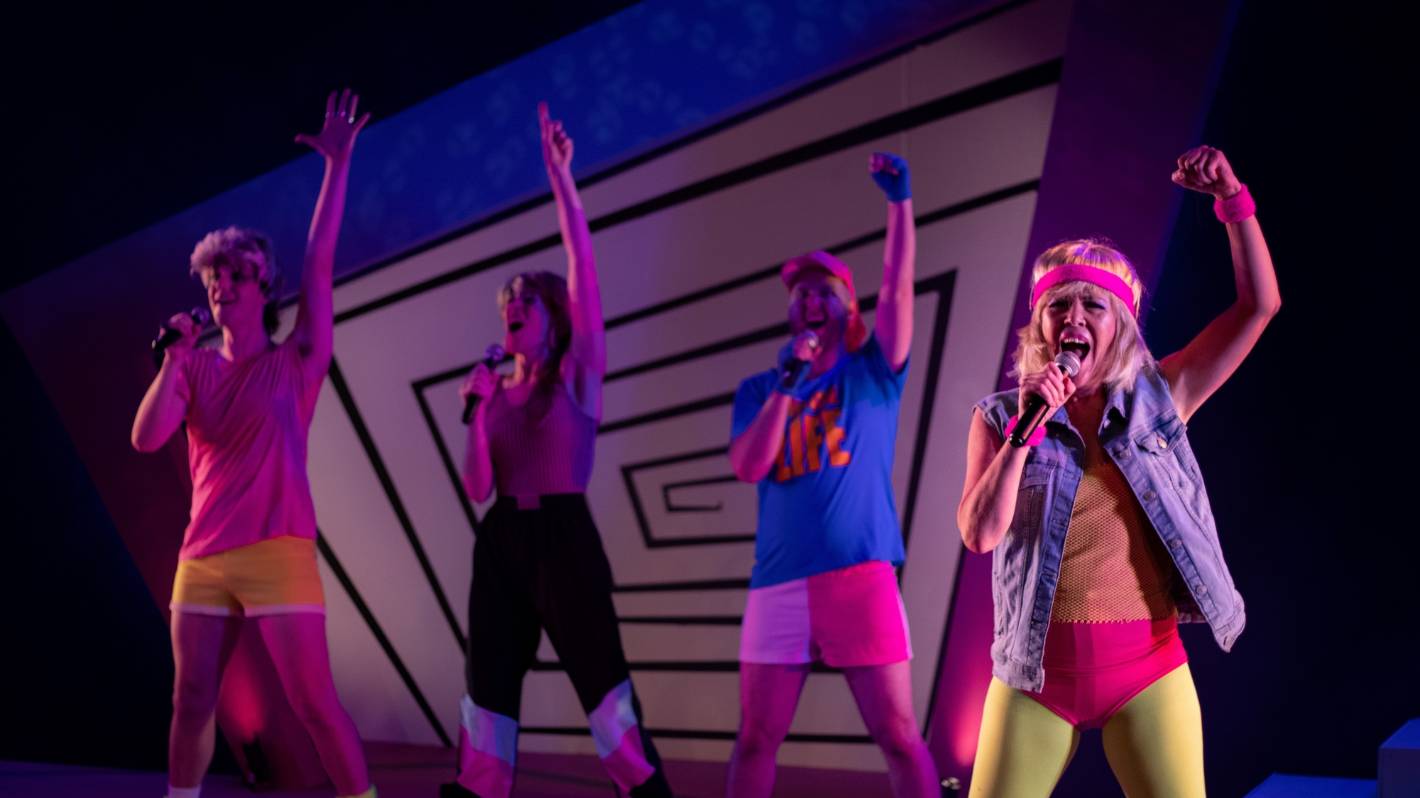 Cringeworthy – the 80s, directed and designed by Andrea Sanders, Circa Theater until June 11. Review by Sarah Catherall.

I hadn’t laughed so much in a long time. Friday night at the Circa Theatre, Andrea Sanders – the founder and singer of the Beatgirls – takes us on a nostalgic journey through the decade I was a teenager: the 80s.

Its three cast members – Susie Dunn, Matt Mulholland and Devon Neiman – weren’t even born when Sanders and I were singing Jenny Morris and The Crocodiles hit Tears.

Cringeworthy – The 80s is a musical featuring some of the Kiwi bands and songs we heard on our airwaves and two TV stations in the 1980s.

A sequel to Cringeworthy – The 70s, the 80s were a decade filled with local hits, when bands like DD Smash, The Mockers, Split Enz, Dance Exponents and The Swingers released songs that are still around and that ( some of us) love today.

The show begins with the song Blam, Blam, Blam There’s No Depression in New Zealand, which came amid concerns about rising inflation, high unemployment and Springbok tour protests. Fast forward 40 years and we have many of the same economic pressures and social tensions.

I find myself screaming “Oh yeah! while the actors sing along to the songs I’ve been playing on my pink two-tier cassette deck, like Jon Stevens’ cover, Montego Bay.

Then he stole the co-op to Oz, “How’s that?” the actors sing. “The lure of Australia’s bright lights and the harsh reality that if you wanted to make it in the music industry you had to go overseas,” Sanders (also the show’s writer and director) tells us.

Neil Finn went there too, after his 1980 song I Got You, which was Split Enz’s most commercially successful song. “Just like the pavlova, Neil was claimed by the Aussies, right?” Sanders reminds us.

While most of the songs are Kiwis, there are a few international hits. One of the funniest scenes comes in the second half, when Dunn and Sanders sing an example of what used to be called the “power ballad.” The Total Eclipse of Bonnie Tyler’s Heart. “Go back to the bright eyes,” sings Sanders.

The song’s lyrics are goofy on reflection, and a group of women who look my age are laughing hysterically in the back row. It’s definitely a must see on a girls night out.

The screenplay is wonderfully researched. The cast skillfully connects the hits to the events of the time. Margaret Thatcher, the royal wedding of Charles and Di, the early election of Rob Muldoon, the arrival of the GST and also weekend shopping. The red phone booths we used to press for free calls, bubble gum jeans, big hair and neon outfits. I even got the same plastic triangle earrings that Sanders wears during a costume change.

We flash our cellphones to a song, with the cast reminding us that we used to light up our lighters at ’80s gigs. Which is another point: It’s easy to look at the decade with tinted glasses. pink, but New Zealand was isolated from the world, we smoked indoors, we feared nuclear war and hadn’t widely embraced gay rights. The cultural cringe was alive and well – there was no New Zealand music quota – unlike today where Kiwi music and culture are supported and celebrated.

Later at home my 16 year old is playing music from YouTube on her computer which is another point Sanders wants to make – we had two TV channels in the 80s and we were taken hostage by the Top 40 and Radio with Pictures, while today’s Gen Zers are bombarded with music options on a huge range of streaming platforms.

They often feel an overload of options, unlike the 80s when things were rare, scheduled and therefore exciting. Thanks to Sanders and his brilliant cast, I remember that time when I was 16, waiting in front of the TV for the music show Shazam to appear.

Farmers in 4 states can apply for drought loans – AgriNews