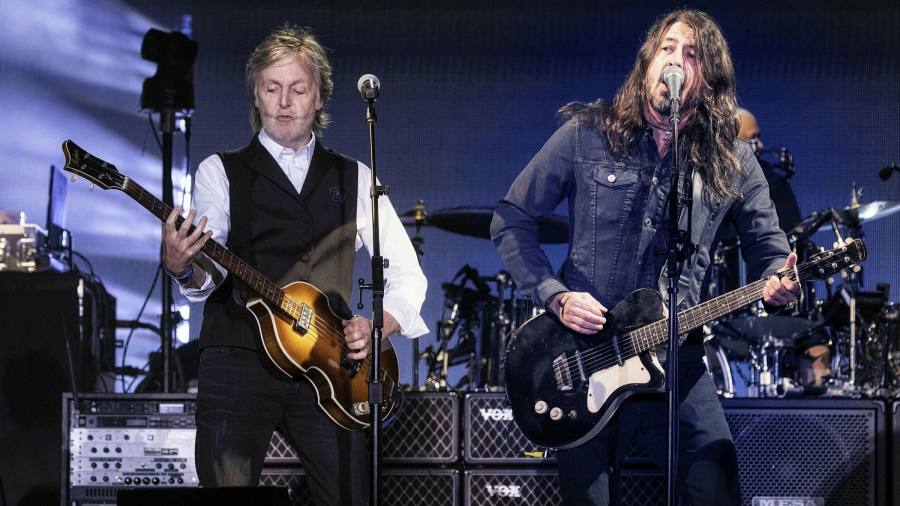 It would have seemed impossible to the long-haired and monsters who inaugurated it in 1970, but Glastonbury Festival has now taken its place as Britain’s top national treasure, alongside Paddington Bear and Dame Judi Dench.

If its counter-cultural roots were nurtured by a sense of difference, then these days, the Somerset extravaganza prides itself on having something for everyone. This year’s event featured nearly 800 acts in a venue with over 200,000 people in attendance. It received full BBC coverage, like a less distinguished Wimbledon. Among the three headliners was the youngest solo artist to do so, Billie Eilish, and also the oldest, Paul McCartney. Glasto, as it is warmly nicknamed, wants to overcome divisions.

McCartney was due to appear in 2020 for the festival’s 50th anniversary, in an ecumenical line-up of rock-rap-pop superstars that also included Kendrick Lamar and Taylor Swift. After that year’s pandemic cancellation and last year’s online mini-festival, Glastonbury brought back two of the three for their return to proper action. McCartney headlined the Pyramid Stage on Saturday, while Lamar was rebooked as the closing act for Sunday (to be covered in a separate review). Eilish was Swift’s replacement as the opening night headliner. She too is one of the biggest names in pop, a sign of the festival cachet.

The official program kicked off on Friday morning with a video address by Ukrainian President Volodymyr Zelenskyy, challenging Glastonbury pleasure-seekers to prove “that freedom always wins”. His olive green military t-shirt gave a sobering sheen to the khaki fatigues that are a festival wardrobe staple, as well as the hedonistic Glasto metaphors of getting ‘bombed’ and ‘blitzed’. He was followed onto the Other Stage (the festival’s second largest space) by a band infamous for using their freedom recklessly rather than wisely – The Libertines, wayward darlings of early 2000s British indie rock, the fag end of Britpop.

As if chastised by Zelenskyy’s words, or perhaps bewildered to find themselves under a bright midday sky, the now middle-aged quartet began slowly. But they built a head of steam with their scruffy anthems – shaky, slamming affairs that seemed on the verge of collapse, only to bounce back with raspy refrains and rhymes in the rough, like co-frontman Pete’s ominous promise Doherty “confess all my sins after several big gins” in “Music When the Lights Go Out”.

Glastonbury’s line-up was filled with indie bands like The Libertines. But the lights went out, or at least dimmed, on this style of music. Over the past 20 years, the festival has managed to diversify. He crams an immense variety of deeds into his 800-acre site, which for the rest of the year is farmland with cows. For its long weekend, the only treat is that of applause, in the form of the refrain heard several times on the stages whatever the musical genre: “Glastonbury, are you having fun?”

The FT’s Friday itinerary featured Pakistani singer Arooj Aftab playing shimmering, rapturous songs with an acoustic guitarist and violinist on stage at West Holts. “Is it a seated vibe?” a festival-goer asked her companion. Yes – and luckily he was sure to submit to the vibe without risking the seat of his pants. Rain threatened, but held back. Sunshine triumphed, as vital to a good time at Glastonbury as any musician in search of applause.

There was standing room only on the West Holts stage for veteran American girl band TLC, which drew huge crowds. The backing band gave their 1990s R&B hits an old-school soulful revue feel, while super-skilled dancers did backflips. Singers Tionne Watkins and Rozonda Thomas sang hits like “No Scrubs” and “Waterfalls” with the pizzazz of American entertainment royalty. The mood on this occasion was captured by a woman in the audience who daringly climbed a pole and started doing pole dancing routines.

A talking point of the festival, sparked by comments from British comedian Lenny Henry, was the whiteness of its audience, in contrast to the diversity of its acts.

Another highlight was Confidence Man’s set at the Park Stage. The Aussie male-female duo staged a riot of hyperactive dance moves, a dazzling display of handography, armography, shimmies, shakes, knee lifts and vogueing – anything but a conga, accompanied by a highly entertaining series of disco, house and electropop Numbers.

Any civilian careless enough to later attempt similar feats of Terpsichorean prowess in nearby Arcadia Field would have caused severe injuries. It was rammed elbow-to-elbow for post-midnight techno as a vast mechanical spider belched fire and a blimp floated through the air with a dancer suspended. The FT rubbed his eyes and wondered if it was time for bed.

Dance music was represented by a huge cast of DJs, from Carl Cox to Calvin Harris. Meanwhile, seekers of old-school acid-rock enlightenment, the soundtrack of Glastonbury’s past, have also been well received by bands such as Japanese psychedelic band Kikagaku Moyo. They played a riveting show at West Holts on Friday morning, where the midday sun was darkened by the fact that it was their last UK appearance: they are on a farewell tour before parting ways.

A talking point of the festival, sparked by comments from British comedian Lenny Henry, was the whiteness of its audience, in contrast to the diversity of its acts. The forest of white arms swaying back and forth under AJ Tracey on a pleasant Pyramid Stage on Saturday was proof of the accuracy of the sighting. So did the West London rapper’s decision to add a rock edge to his UK garage and grime sound with a guitarist and drummer. There were a decent number of rappers in the line-up, but no dedicated music scene.

In other respects, however, the festival’s clientele seemed encouragingly mixed. All ages were present, with a seemingly equal split between women and men. The ticket price of £285 represented outstanding value for money, incorporating a maximum of five nights of camping as well as the plentiful lineup of acts. Festival organizers Michael Eavis and his daughter Emily Eavis resisted financial trafficking of the event.

On Saturday, Greta Thunberg gave a surprise speech about climate change from the Pyramid Stage (one disrupter shouted “Boring!” and was in turn heckled) before Haim’s set. The Californian trio played an impeccably summery show, with reserves of sharp professionalism beneath an airy exterior. At the other stage, Nigerian Afrobeats star Burna Boy played the sunset hour, reeling off dance jams in a golden glow with a large ensemble of musicians and backing vocals.

The United States Supreme Court’s anti-abortion action in the overturning of Roe vs. Wade, announced during the festival, was repeatedly denounced on the stages. One of the most impactful interventions came from new American pop star Olivia Rodrigo on the other stage, who invited Lily Allen to join her for a version of the British singer’s “Fuck You.” It was dedicated to the five Conservative judges.

Billie Eilish also referred to their decision as a “dark day for women in the United States,” as she put it in her Friday headline. The youngest solo headliner, 20, has adapted her current arena tour for the vast space of the Pyramid Stage, with songs that are more upbeat and less slow. The cleverly quiet sound design of hits such as “Bury a Friend” was conveyed surprisingly well in the large outdoor space – but it caused a subdued atmosphere. Although Eilish is a charismatic presence, the staging and its material felt engulfed in the nocturnal expanse. A knockout finale with “Happier Than Ever,” featuring vocal fireworks and real fireworks, accompanied by guitar-playing pyrotechnics from brother Finneas O’Connell, underscored the rest of the set. a bit of a wet squib.

Saturday’s headliner had just turned 80. A tireless McCartney continued to play for more than double the length of Eilish’s 75-minute appearance. A massive crowd of around 100,000 marched away from the Pyramid stage. Macca proceeded to do so on his terms. That meant regrettable appearances for “Dance Tonight,” the Beatles’ lowlight kneeling ad “Ob-La-Di, Ob-La-Da,” and antique anecdotes about Jimi (Hendrix) and Eric (Clapton), as well as nervous nerves like a “Blackbird” solo. McCartney sang pragmatically, not pushing his voice beyond his capacity.

Excitement over the announcement of a special guest from the US West Coast raised hopes of an appearance by California expat Ringo Starr: only for the beaming figure of Dave Grohl to step onto stage. The next special guest was more special: Bruce Springsteen, who joined Macca for his own song “Glory Days” and the Beatles’ “I Wanna Be Your Man.”

McCartney took the Larks too far, returning for tedious guitar practice with his guests and bandmates in a final rendition of Abbey Roadis “The End”. It should have ended with the closer pre-recall “Hey Jude,” during which the ex-Beatle led his huge audience in a resonant backing chant. In this mass chorus, na-na-na-ing away vigorously, were the ties that bind, a meeting between the best of the two national treasures of Glasto and Macca.