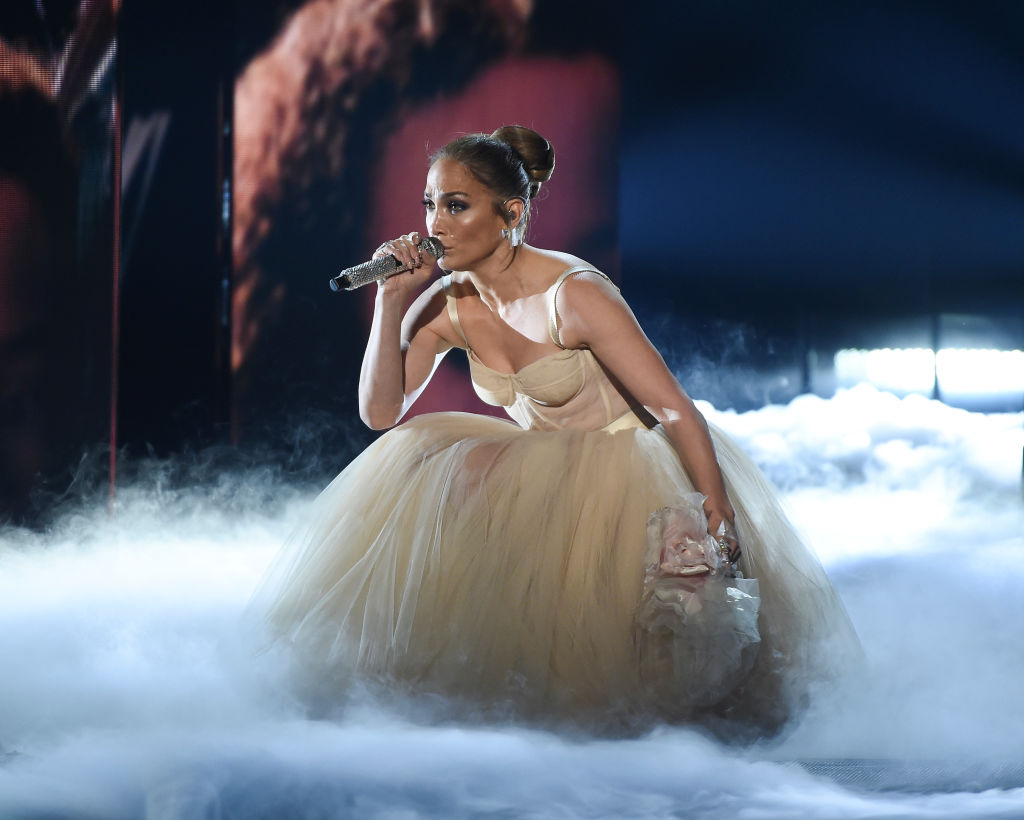 Jennifer Lopez opted for bridal chic during her performance at the 2021 American Music Awards in LA on Sunday night.

The 52-year-old singer donned a glamorous Dolce and Gabbana ivory-colored ball gown with a structured corset that gave off serious bridal gown vibes.

From frothy layers of tulle and couture veil, to the way her hair was pulled back into a chic bun, the bride’s look hinted that Lopez might have the wedding in mind.

But then again, she performed the single On my way, which is on the soundtrack to her upcoming romantic comedy, Marry Me, so the bridal outfit was entirely themed.

Lopez began the performance in a stunning black dress with white accents and a jeweled microphone as she sang in front of a virtual orchestra.

The singer then disappeared behind a screen and stepped out wearing the bridal-inspired gown with a matching veil.

Sticking to the theme of the big day, Lopez finished her routine by throwing her veil into the audience like a bouquet of flowers.

Lopez’s new song was released on Thursday. “This song is about overcoming old mistakes and finding your destiny… But it’s just for you guys here tonight,” Lopez told fans while performing the track for the first time at Global Citizen Live in September.

Also in reference to the new song, Lopez shared a selfie of herself heading towards the awards show.

Read more: Ben Affleck reveals he is “amazed” by his girlfriend Jennifer Lopez

“#OnMyWay your @AMAs,” she tweeted alongside the glamorous snapshot.

The wedding dress performance comes just days after the singer and actor said on the Today show that she still believes in marriage.

“I don’t know, yeah, I guess,” she said when asked if she would come back down the aisle. “I still believe in happiness forever, of course, 100%.”

No doubt the performance will have made people wonder if Lopez is considering taking the next steps in his rebooted relationship with Ben Affleck.

The couple, affectionately known as Bennifer, dated in the early 2000s and got engaged, before separating in 2004, but rekindled their romance earlier this year.

At the very beginning of the year, Lopez was engaged to Alex Rodriquez. The couple have repeatedly postponed their wedding, citing the pandemic as the main reason for the cancellations, but the couple ultimately ended their relationship and Lopez found themselves in the arms of her former beau Affleck.

While Affleck was not in attendance for last night’s bridal performance, fans can’t help but wonder if the star is giving any major clue as to what’s to come in her personal life.

Especially since his former publicist, Rob Shuter, claimed last month that he could see the couple getting married – also hinting that Affleck was the one who had run away.

If JLo looks so beautiful in a fake wedding dress for a show, imagine how beautiful she would be in real life.