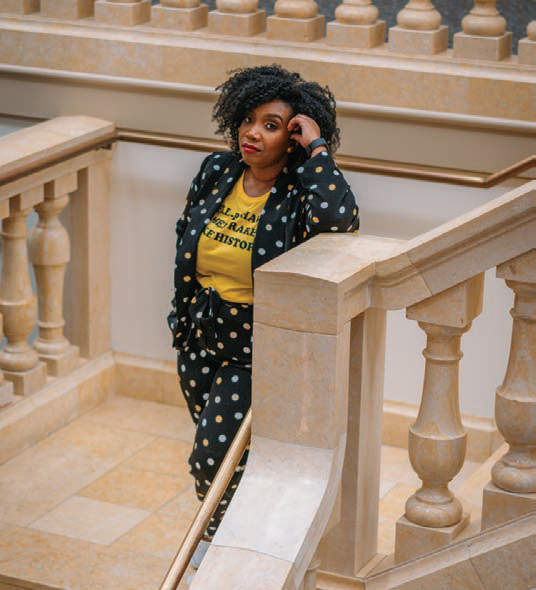 â€œFor me, it’s a testament that people see my work. In a way, it feels a lot more about my work and the impact of my work compared to celebrating me, which is kind of nice, â€said Kennita Hickman on winning the 2021 Music Ambassador award from Radio Milwaukee . (Photo by Chris Siegel)

Six months ago, Kennita Hickman decided to give it a try. For years his branding and management firm, Catera, was more of a side business, but in June Hickman decided to become a full-fledged entrepreneur and make it his full-time job.

During those six months, Hickman worked on his “Artists Eats” project, organized musicians for Lakeside at MAM and Music on the Beerline and more.

Last week Radio Milwaukee recognized Hickman’s hard work and awarded him the 2021 Music Ambassador Award. The award, which began in 2007, recognizes individuals or organizations for their efforts to elevate the Milwaukee music scene.

â€œIt means so much,â€ Hickman said. â€œFor me, it’s a testament that people see my work. In a way, it feels a lot more in my work and the impact of my work compared to celebrating me, which is kind of nice.

For Hickman, it’s not about playing politics for rewards, but about doing a job that she is proud of and that she feels God is proud of.

â€œIt’s an incredible honor that my work speaks for itself and creates space for Catera and ‘Artist Eats’ and myself to be recognized,â€ she said.

Hickman is the first black woman to win this award. Previous winners include Vic Thomas, the Milwaukee World Festival, the Milwaukee Public Library and more.

â€œI hope I win the award as the first black woman, that there are other people in the world majority who see this as an opportunity to make an impact,â€ she said. â€œI hope other people will come and help fill the space we have; to support artists when they are on stage and when they are not on stage.

Since entering the Milwaukee music scene, Hickman’s goal has been to do intentional work. She first began her career in radio, before becoming a freelance writer for magazines and other publications beyond Milwaukee. But around 2008, she felt the desire to support Milwaukee artists.

Milwaukee-based artists would submit their press kits to the publications Hickman worked for, but they weren’t very good, she said. So Hickman started helping artists. She put them in contact with a photographer, rewrote their biography and reworked their press kit before resubmitting it to her editor.

Soon word began to spread across the North Side of Milwaukee: A black girl was rewriting artist biographies and submitting them for publication.

â€œI think there was just one thing about me that recognized the importance for Milwaukee to have access to these skills as well,â€ she said.

As part of her brand strategy and management, Hickman is currently working on brand influence projects with nonprofit organizations where she connects artists with advocacy work.

She wanted to give Milwaukee-based celebrities a voiceover where they could leverage their status to do advocacy work and get paid.

In November, Hickman helped hook up B ~ Free, Webster X, and DJ Bizzon to the Versiti Blood Center in Wisconsin for a blood drive.

Over the past few years, she has assisted Riverworks Development Corporation with its â€œMusic on the Beerlineâ€ event. This year, she took on the role of stage manager.

â€œCatera seeks to fill the void for businesses and nonprofits looking to engage with artists on an equitable basis,â€ she said. “[It is] also supporting artists on the branding and campaign sideâ€¦ my job is always to help independent artists be seen and heard.

One of Hickman’s biggest projects is his video series, â€œArtist Eats,â€ which features independent artists and local restaurants.

His hope is to expand the series to other cities and showcase their independent artists and local dishes.

In addition to fundraising, Hickman’s goals for the coming year include the development of his clients. She wants to focus on connecting artists with performance opportunities and branded influence projects where they can be remunerated.

â€œThere isn’t enough consumer hunger for these things,â€ she said. “We haven’t really had a campaign that educated the community on the importance of supporting your Milwaukee-based artists across all disciplines.”

She continued, “I hope to continue to use all the influence I have to really start to
get people to think about the importance of this and how we start to put these things in place.

There is so much promise in Milwaukee, and so much work to be done, she said, expressing hope that other people will feel inspired to step up to branding and fill that space.