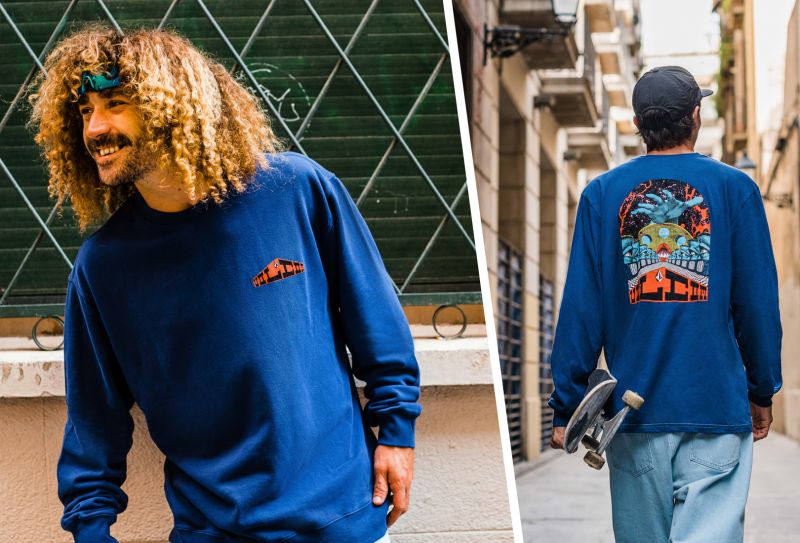 Max Loeffler and Elzo Durt are no strangers to the popular Volcom artist series; they have previously collaborated on collections and worked on other Volcom projects such as event posters and marketing materials. For 2022, the pair revisited the “Parallel Universe” theme, creating a series of t-shirts, hoodies and sweatshirts in their trademark style.

Professional illustrator and graphic designer, Max Löffler draws inspiration from classic surrealism and retro science fiction book covers – much of which is evident in his work. He likes to add meaning to the mundane, creating illustrations that take advantage of a dense, dark atmosphere with a hint of weirdly wonderful absurdity.

Elzo Durt is another creative legend who has worked with Volcom many times. Originally from Brussels, he grew up deeply rooted in the punk and skate scenes, dreaming of designing album covers for big bands. Such an aspiration led to a degree in graphic design. His signature psychedelic style, influenced by punk, sci-fi, pop art and underground culture, can be seen on numerous albums, flyers and designs.

With a mixed approach of etchings, computer graphics and acrylic paintings, he describes his daring style as “collages of mystically arranged elements, assembled with fanatical accuracy by a wretched creature seemingly in the grip of a gnawing force, ridden and scourged by a devil from the depths of hell”.

In an interesting addition, the two Loffler and Hard have created a Spotify playlist to celebrate the collection which can be listened to on the Volcom Entertainment Account. Of his picks, Loeffler says, “It’s a mix of all-time favorites, tracks I like to listen to when I’m sitting in a bar, and songs for bonfire beers.”

What’s also unique about Volcom’s Featured Artist Series is that it treats collections as works of art in their own right, as they should be. In fact, Volcom is hosting a three-week exhibition of Durt’s creative works in Brussels this month with an opening night on February 29. Want to go? You can book it online here.

Meanwhile, Loeffler and Durt’s art has been transformed into 120 limited edition screen-printed posters, available to win at 120 Volcom retailers across Europe – just ask your local store. The new collection of featured artists is now available on Volcom.com and its resellers.