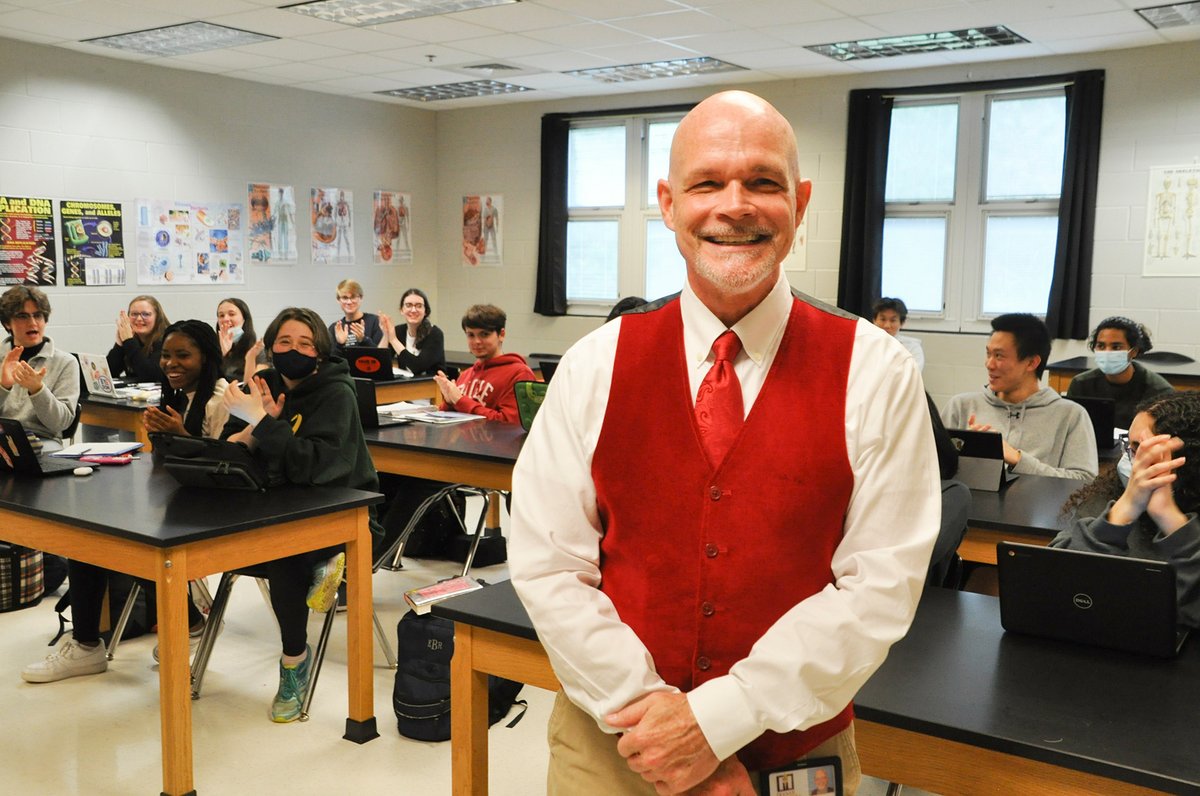 McEwan and Evans named Hoover Teachers of the Year

When Paul McEwan looks back on his childhood, he sees an unlikely candidate to become a teacher.

He was small for his age, had a quiet personality, and had difficulty writing.

But now McEwan, a biology teacher at Hoover High School, has been chosen as high school teacher of the year for one of Alabama’s largest school districts — for the second time.

He won the Hoover School District Award in the 2016-2017 school year and became the 2017-2018 High School Teacher of the Year for all of Alabama and a finalist for the General Teacher’s Award. year of Alabama.

But his colleagues think so much of him and his continued excellence that he was chosen again this year as Teacher of the Year for Hoover High and all middle and high schools in the district.

While McEwan struggled with a learning disability as a child, he had an insatiable curiosity about learning.

One of three children in a single-parent family of limited financial means, he moved 800 miles from home after graduating from high school and attending Asbury College in Kentucky.

One of his many odd jobs was working as a peer tutor, which ignited his passion for teaching, he said.

He is now in his 38th year of teaching and doing a dynamic job, according to his principal and a colleague.

“When I observe him in the classroom, he is always on his feet and interacting with his students,” Hoover High Principal John Montgomery said in a letter, nominating McEwan for the High School Teacher Award. year of the district. “His lessons for AP [Advanced Placement] biology and IB [International Baccalaureate] biology are dynamic and its students are always engaged.

McEwan uses an “argument-driven inquiry” teaching method that emphasizes students working together to solve problems and requires students to find the answers to questions with evidence to support the answers. It involves a lot of hands-on science experiments instead of rote memorization of facts.

Students in his classes can be challenged to solve a crime like a medical examiner, discovering where a “murder victim” who was poisoned ate his last meal by analyzing the supposed contents of his stomach.

Susan Norris, a fellow teacher at Hoover High, said in a letter of recommendation that McEwan had taught three of her own children and said he was the type of teacher who stretches students, pushes them to think in ways critical and allows them to excel at their own pace. .

“What you don’t see are boring lectures and multiple-choice memorization,” Norris wrote. “He makes a difference in the classroom as well as in the lives of every student.”

McEwan is also the type of teacher who leaves sticky notes or handwritten cards on students’ desks to remind them that they are seen, valued and loved, Norris wrote.

Montgomery said McEwan is one of the most innovative teachers he has worked with in his 39-year career.

McEwan is also a leader who shares best practices, leading the professional development of other teachers and mentoring new teachers and trainees at the University of Alabama at Birmingham.

He was a member of the high school’s Diversity Council and Positive Behavior Support and Intervention Committee. He led a science technology, engineering, and math camp for middle schoolers, was the keynote speaker at the 2017 Alabama Education Association convention, was appointed to the Superintendent’s Professional Learning Committee. state school in 2018 and was named the 2021 Outstanding Biology Teacher for Alabama. .

McEwan taught nine years in Florida, three years in South Carolina, and nine years in Kentucky before joining Hoover High School in 2006. He has a bachelor’s degree in biology and secondary education and a master’s degree in media technology. teachers, both from Asbury University.

McEwan said in his nomination for the district’s Teacher of the Year award that he hopes to inspire a love of learning in his students, keeping them actively engaged from the moment they walk through the door until until the dismissal bell rings. He wants to be remembered as a teacher who demands a lot of students but fiercely supports them every step of the way, he said.

Evans, Hoover’s Elementary Teacher of the Year, has been described by colleagues and principals as a master teacher who has a dynamic way of reaching out to students.

Avery Lieske, a fellow teacher who considers Evans a mentor, said in a letter of recommendation that Evans is constantly looking for creative ways to capture students’ attention and make learning magical, yet meaningful.

“Whether it’s using the most advanced STEAM techniques, incorporating music into the classroom, or simply her calm presence, Geri is extremely good at turning an ordinary lesson into extraordinary fun!” Lieske wrote.

She not only teaches students herself, but has brought in guest presenters such as astronauts, airline pilots, zoologists, cardiologists, meteorologists, scientists and drone operators, said fellow teacher Katie. Collins.

Bluff Park Elementary principal Ami Weems said in an appointment letter that she had only been at the school for three years, but it only took her a few days to realize that Evans was a master educator.

Evans is a thoughtful and effective content master, leader and teacher, Weems wrote.

Evans has been instrumental in the Girls Engaged in Math and Science organization at Hoover for the past six years, helping organize an annual exhibit that has grown to include more than 300 girls, Weems said.

“Geri is fearless when it comes to creating rigorous, engaging lessons that connect to standards, expand her students’ thinking, integrate technology, and leave her students hungry for more,” Weems wrote.

Evans, who has been certified twice by the National Professional Teaching Standards Board, leads the professional development of other teachers in the district. She has also been a presenter for the Alabama Science Teachers Association, has traveled the country presenting STEM conferences, and has been a teacher trainer for NASA and the Birmingham Zoo.

“Geri is extremely passionate about growing learners, but she’s equally passionate about helping her colleagues grow as well,” Weems wrote. “She is the epitome of a person with a growth mindset. She puts all of her energy into learning and she truly has the level of influence that makes others believe they can accomplish anything!

Evans grew up as one of 11 children and has vivid memories of playing school with all of his sisters. She said in her entry for Hoover Elementary Teacher of the Year that she had a fourth-grade teacher who ignited a spark within herself to teach.

“I strive to provide all of my students with unique, creative, and meaningful lessons that help them dream big and change the world,” Evans wrote.

She is now in her 25th year of teaching and has worked with Hoover City Schools for 20 years. She has been at Bluff Park Elementary for 17 years and is in her sixth year as a STEAM teacher.

Several years ago, she was inducted into the Jacksonville State University Teachers Hall of Fame, and in 2020 was named an Alabama finalist for the Presidential Excellence in Mathematics Teaching Awards. and science.

Collins said three of her four children have had Evans as a teacher, and Evans’ love of science and math naturally rubs off on her children.

“My kids are walking around and constantly wanting to find things to bring to show Mrs. Evans,” Collins wrote. “My daughter will find insects, both alive and dead, and will want to study their shape and body characteristics.”

Evans is a natural and powerful teacher, Collins said.

“Her impact on students, colleagues and stakeholders within the community could never be duplicated because what she does is an art form,” Collins said. “Geri is a powerful force, invoking a passion for learning in everyone she meets. She lives, breathes and inspires a love for math and science wherever she goes, and for that, our school, our community and our world will be changed for the better.

McEwan and Evans were chosen as Teachers of the Year at every school in the Hoover District. Here is the complete list of teachers of the year from each school: