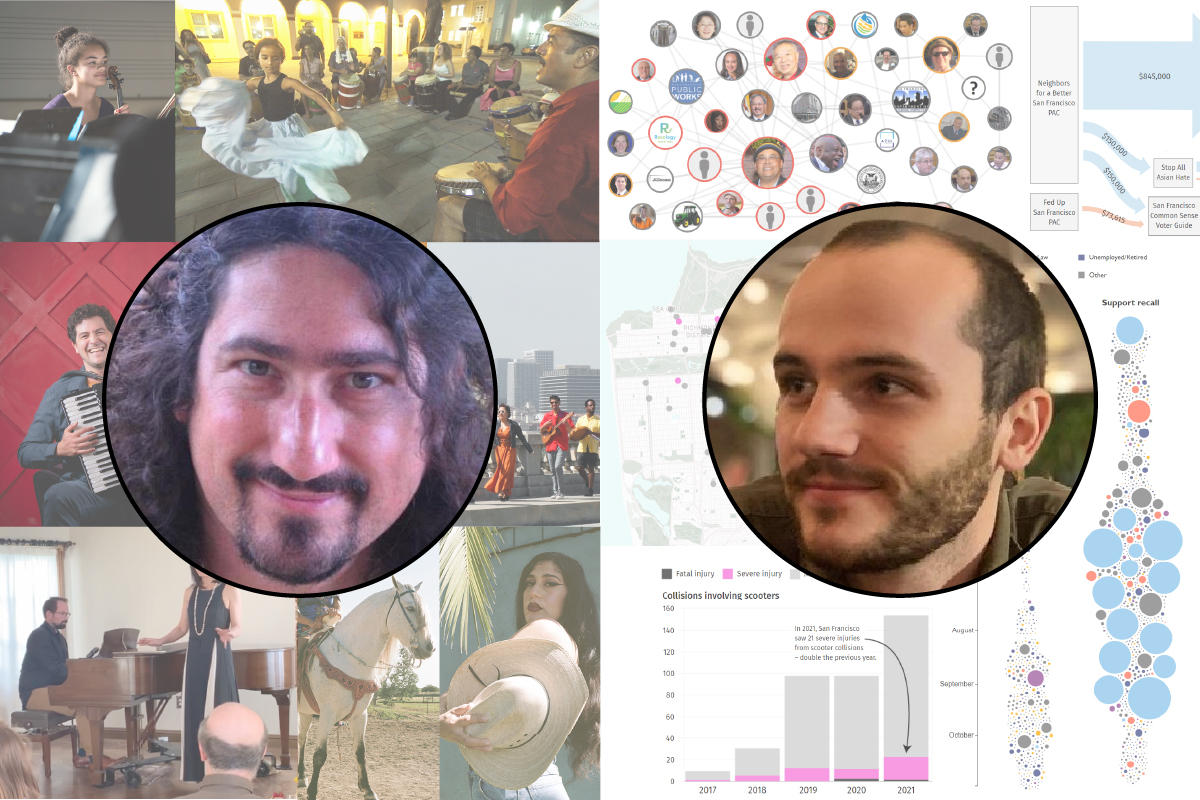 Mission local data specialist Will Jarrett and arts writer Andrew Gilbert each received top awards from the Northern California Chapter of the Society of Professional Journalists.

Gilbert drew praise for his coverage of the music scene in the Mission. He previewed a show at Brava by venerable Los Angeles ensemble Quetzal; reported on the 100 new works marking the Community Music Center’s 100th anniversary; and the profiled ascending mission icon La Doña:

But, just as the Giants can’t make the playoffs without a deep bench, La Doña’s (aka Cecilia Peña-Govea, or Ceci to her longtime friends) considerable success didn’t just stem from her own creativity. fruitful. Long before Peña-Govea adopted her towering moniker, which loosely translates to “patron lady”, she had cultivated an extended team of collaborators whose work plays a vital role in her music, videos, album covers. , its products and its personal style.

Jarrett won in the data visualization category, where his work added depth to Mission Local’s reports.

His winning contributions include in-depth graphics and reporting on scooter accidents, campaign finance and, in one of Mission Local’s most popular and innovative features, the interactive “Web of Corruption”.

Each of its entries, editor Lydia Chávez wrote in the nomination letter, “asks readers to engage with ongoing stories, often prompting them to view the story from a different perspective.”

The Web of Corruption, she wrote, “is a superb example of how to help readers unravel an ongoing scandal – and would stand on its own as a single entry. Joe Eskenazi’s writings on urban corruption over the past two years have spread to so many people inside and outside of city government that it has become difficult for readers to follow all the pieces.

Jarrett’s interactive has remedied this and is being updated as the scandals continue.

“I’m so damn proud of Andy and Will today,” said Mission Local editor Joe Eskenazi. “This demonstrates the excellence of Mission Local both as a traditional community news source while penetrating new dimensions of what a community news source can be. And, by all means, go mess with the Web of Corruption. Drag around players. See who is following whom. We laugh so as not to cry.

Editor-in-Chief/Columnist. Joe was born in San Francisco, raised in the Bay Area, and attended UC Berkeley. He never left.

“Your Humble Narrator” was a writer and columnist for SF Weekly from 2007 to 2015, and editor of San Francisco Magazine from 2015 to 2017. You may have also read his work in the Guardian (US and UK). United) ; San Francisco Public Press; San Francisco Chronicle; San Francisco Examiner; Dallas Morning News; and elsewhere.

He resides in the Excelsior with his wife and three (!) children, 7 km from his hometown and 5,474 from his own.

The Northern California branch of the Society of Professional Journalists named Eskenazi the 2019 Journalist of the Year.