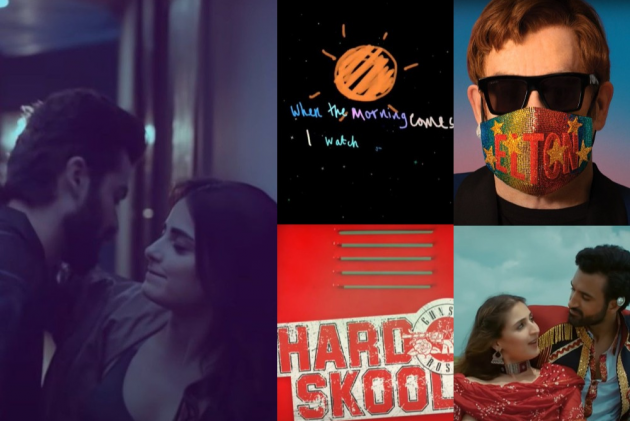 ‘My Universe’ by Coldplay X BTS and the title track ‘Shiddat’

From the old-fashioned rock number ‘Hard Skool’ by Guns ‘N’ Roses to Dhvani Bhanushali and the dance number by Vishal Dadlani ‘Mehendi’, here are the five best tracks released this week.

“My Universe” from Coldplay X BTS

What happens when two of the greatest musical sensations on Earth collaborate? Well, if history has proven anything, the result is usually a huge success. ‘My Universe,’ a collaborative effort between British rock band Coldplay and K-pop boy band BTS, is just that – something that puts a smile on the listener’s face. With this perfect blend of Coldplay musical sensibilities, the melody and entire song progression will remind you of a typical Coldplay song. And then the dance pieces, the celebration pieces, that’s what BTS brings to the table.

The latest single from iconic rock band Guns ‘N’ Roses is next on our list. It’s tough, manic, and fast, something rock fans have known the band for. ‘Hard Skool’ has all the elements that make it a true hard rock track, starting with a cool bass riff, distorted guitar riffs and of course Axl Rose’s vocals, which brings back the emotion of the song. at home !

“After all” by Elton John and Charlie Puth

British pop star Elton John is one of the few musical artists who has evolved seamlessly with music over the years while maintaining the heart and soul that is the hallmark of all of his songs. “After All” is the perfect example of why someone like Elton John would agree to collaborate with Charlie Puth. The song is just happy, beautiful and very positive, despite the presence of heartache and pain. Musically, Charlie Puth complimented the song beautifully, bringing his new-age pop sensibilities to the table that add to the feel and tempo of the song.

Bollywood music is once again reclaiming its space after a long hiatus due to the coronavirus pandemic. Romantic songs are often considered the most popular Bollywood genre and the title track from Manan Bharadwaj’s film “Shiddat” only reinforces this belief. A slow and romantic number but by no means soft or tender, the song is punchy, passionate and offers a combination of emotions, ranging from agonizing questions to beautiful consequences. Since the whole song is written, composed and sung by Manan Bharadwaj, one can understand the harmonious fusion of these three departments and this is just one of those romantic songs that easily stands out from the rest of the romantic numbers.

This dance-pop number released earlier in the week has become one of the most watched music videos on Youtube in just 24 hours after the first day of its release. The dance-pop elements, mixed with traditional Gujarati and Rajasthani elements make this a beautiful pop song, to which anyone can dance. Dhvani and Vishal Dadlani completely justified the rhythm and tempo of the song with their vocals bringing the emotion of the song.

Watch Now: Art Fair on the Square returns to downtown with some 500 exhibitors | Arts and theater