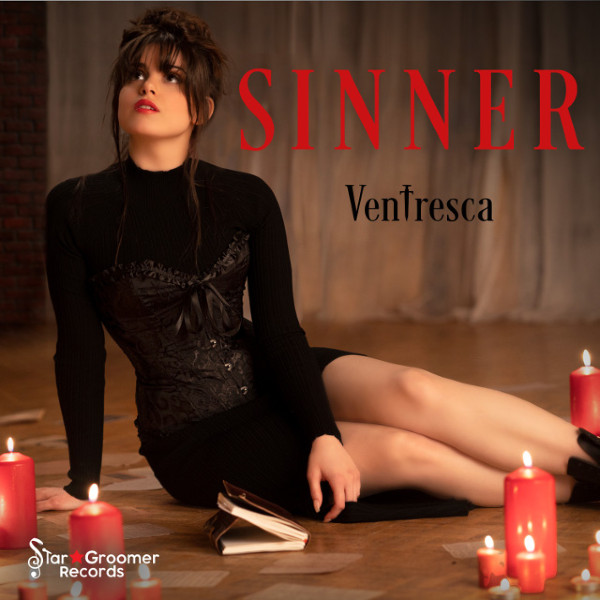 Pop singer-songwriter Ventresca recently unveiled his new single/music video, “SINNER,” a song about gaining the ability to see through the motivations of others, especially his devious ex-lover.

Using the story of Adam and Eve, Ventresca’s evocative lyrics tell the story: “Here I tell our story, about evil and good.”

After studying dance at the Canadian Dance Unit, Ventresca attended the Royal Conservatory of Music and then released her debut single, “Craving”, which caught the attention of The Star Groomer, Cindy Valentine, who immediately signed Ventresca.

The video shows Ventresca dressed in black, sitting on the ground with red candles around her. As the visuals unfold, her lover, played by the white-clad Julian Mete, offers her an apple, a clever variation on the original story. Recognizing his bad intentions, she refuses the apple. Now dressed in black, he pursues her, but she knows the truth – he is “a sinner and a liar”.

CelebMix sat down with Ventresca to find out more about the person behind the music, his writing process, and the takeaways from the video.

What are three things you can’t live without?

I definitely couldn’t live without books, music of course! And dancing – those are my favorite things

‘SINNER’ was actually a collaboration with my producer/songwriter and co-writer Cindy Valentine. Our ideas came from my first opening words on Adam and Eve and this idea came from a book I was reading at the time. From there, we decided it would be a good idea to take the Adam and Eve story and give it a little twist!

Who made the video and where was it shot?

Luke Camozzi of Zed Zed Productions with his team directed the music video with executive producer Cindy Valentine of The Star Groomer. We shot the video in two locations. The first was Hy Hope Farm in Ashburn, Ontario, which was beautiful. The second location was Phat Dog Visuals in Toronto, Ontario.

What do you want people to take away from the video?

One element of the video that I really want people to take away is that not everyone you meet or see has good intentions for your wellbeing, which is why in the video when the man takes off his mask , he’s still trying to trick me but he’s the same person under the mask. I really wanted to make this an important point and something people should understand.

How did you start music?

When I was little and attending my brother’s guitar recital, there was a group of girls singing on stage when we arrived and I was so mesmerized and realized that I wanted to do the same. I started studying classical music at the Royal Conservatory of Music in Toronto and taking dance lessons. I finally found my niche in the pop world and started writing lyrics and collaborating.

Where do you come from?

Has your hometown had an impact on your sound?

I grew up in Nobleton, Ontario which is not far from Toronto, and of course Canada itself with all the talent here is a constant influence… The Weeknd, Alanis Morissette and Drake for n to name a few.

Which singers/musicians have influenced your sound?

I think the collaboration with other writers has an 80s influence with a touch of The Weeknd, Twice and a pinch of Madison Beer.

Did your sound evolve naturally or did you deliberately push it in a certain direction?

All of my work has been with collaborations, I think a bit of my vision and their influence in the composition, beats and bouncy lyrical ideas create a unique combo.

What inspires your writing? Are you inspired by poems, music or other media?

Reading great books that allow me to escape, and my daily journey in life, good, bad, happy or sad, inspires me.

So it varies each time, sometimes I start with a lyrical concept, a melody, or my co-writer Cindy Valentine may have a musical composition, a beat, a melody or a story that we can both vibe on and that becomes magical and so much fun!

Which artists do you think are killing it right now?

I’m a huge K-pop fan so BLACKPINK is killing it right now and The Weeknd is absolutely amazing.

how do you define success?

If you are working towards your goal and you are satisfied with the result, then you have already succeeded. I also believe that if you can make a difference by helping those in need along the way, that’s ultimate success. Sharing is caring!

What can your fans expect over the next six months? Music videos? Live concerts?

I have some new songs planned for 2023 with accompanying videos. In 2023, I’ll be in Los Angeles during Grammy Week for the Soiree Living Legend Awards, and I’ll just be scheduling performances for my Canadian tour.