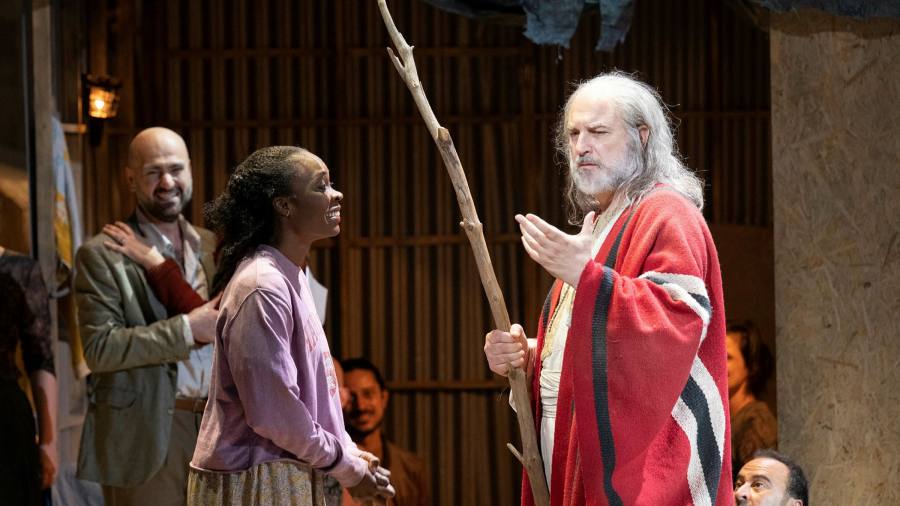 Reviews of the Festival d’Aix — a bewitching Moses and Pharaoh, a heartbreaking Resurrection

It looked like a dramatization of the political events of the day. Disturbed by power, an entire government – leaders, aides and backbenchers – throws itself into the sea and drowns. Suits, ties and stiletto heels swirl with the currents. Schadenfreude being the order of the day, it was hard to stifle a giggle.

Of course, it was the Egyptian army under Pharaoh, not Johnson’s government, but Tobias Krazer’s new Rossini staging. Moses and Pharaoh because the Festival d’Aix-en-Provence is so current, so intelligent and so relevant that it is too easy to see the news of 1827 opera series.

History itself – a refugee population in exile, ruled by a religious fanatic, locked in bitter conflict with a despotic regime – is all too easily changed. Kratzer makes maximum use of the stage at the Théâtre de l’Archevêché, with Rainer Sellmaier’s setting shifting from refugee camp and government headquarters to a waterfront for the denouement.

Moses is dressed as a biblical prophet from a 1960s movie, while everyone else is in modern attire; one sees immediately that he is a rigid and old-fashioned sect leader, infuriating his followers with his undiplomatic outbursts. There’s a catch: he really does have a direct line to God and can strike people blindly, order a cyberattack, or call down plagues at will. His people are afraid of him, but they too would die for him.

Pharaoh, in a well-tailored suit, is Assad or Putin or any other contemporary dictator, suspicious of everyone, consumed by ambition and rage. Kratzer and his team have flipped every line of the booklet over and over again, and the level of insight is mind-boggling. These are people who may not mean what they say, or who may not say what they mean, but we see all the complex relationships exposed with unforgiving clarity. It’s a joint-whitening ride, spellbinding every moment; it’s classic Régietheatreas good as possible.

Michele Mariotti clearly agrees with all of Kratzer’s ideas, leading with passion, a keen sense of architecture and superb attention to detail. The cast is excellent, from the stentorian of Michele Pertusi Moses and the agile and capable Eliézer of Mert Süngü to the sometimes fragile but strong Anaï of Jeanine De Bique and the breathtakingly beautiful Sinaïde of Vasilisa Berzhanskaya. Pene Pati’s impetuous and egocentric Amenophis is a tour de force. The choir and orchestra of the Opéra de Lyon are in top form. If only opera could always be so fun. ★★★★★

On the other hand, that of Romeo Castellucci Resurrection, a staging of Mahler’s second symphony, is heartbreakingly sober. He plays near Marseille in a derelict handball stadium, a gigantic, poorly designed mass of real estate that the Festival d’Aix is ​​helping to rehabilitate.

Audiences crowd into narrow rows of steeply reclined seats, facing a raised platform covered in wet sand and earth. The choir, youth choir and Orchester de Paris sit in a cavernous pit below the stage. Outside, the light is fading; suddenly a white horse gallops through the back doors and holds the stage, exploring the mounds of sand, gazing curiously at the audience. His trainer appears, gathers the reins and then comes upon something horrible, half buried in the sand. Within minutes, a forensic team is on the scene, digging out a decomposing body from the earth. Other team members and other organizations follow.

Castellucci uses Mahler’s music to tell the story of the discovery and exhumation of a mass grave. As the bitter and dark movements unfold, with their moments of tenderness and explosive outbursts of rage, a small army of white-clad workers unearths eighty corpses of men, women and children, the spreads on body bags, catalogs them, zips them up and loads them into waiting UNHCR vans. All of this is precisely choreographed to fill almost the entire duration of Mahler’s symphony. It’s thoroughly engrossing for a good quarter of an hour, but becomes numbing as the music progresses, reducing the expressive nuances of Mahler’s sprawling score to the soundtrack of a genocide documentary.

The tension mounts as, first, the solo singers (the adorable Golda Schultz and Marianne Crebassa) and then the double choir sing of reassurance and resurrection. The vans with the bodies leave; the workers leave. On the empty stage, the rain falls. That’s all. Castelluci gave us the most senseless death ever. It could be Bucha or Mariupol today, or Syria or Sarajevo or Rwanda or too many other places, all near and recent.

Esa-Pekka Salonen adapts a version of Mahler to the circumstances, light years from the comfort of a concert hall. His orchestra is, of necessity, amplified – expensive but not always good – and he keeps the rhythm lively, the tone raw and the atmosphere somewhere between sardonic and shattering.

So we have a lot of rage against the injustice of death. What we don’t get is any resurrection. Fair enough. Perhaps the point is the bringing to light of past wrongs, the little rituals that acknowledge a life lived. What Castelluci gives us the most hope for is the compassion that the gravediggers show towards each other. That may be, in the end, the best we can hope for. ★★★★☆

Pierre Audi’s 2022 festival is ambitious, complex and challenging, often taking audiences out of their comfort zone. The dark, fragmented by Andrea Breth Salome completely breaks free from narrative, with much of it taking place in the dark conceptual spaces of the unconscious. Elsa Dreisig is convincing and childlike in Strauss’ title role, aided well by Raimund Orfeo Voigt’s singer-friendly sets, changing box-like pieces that double as acoustic shells; John Daszak is a beautifully overworked Herod, Angela Denoke a charged and cold Herodias, Gábor Bretz has genuine gravitas as Jochanaan. ★★★★☆

The idea of ​​putting Mozart back Idomenee to Japanese director Satoshi Miyagi was high risk – Miyagi had no previous experience of opera – and his perfectly static theatrical style is reminiscent of nothing more than an Edward Gorey cartoon of an opera: old-fashioned , a little rickety, essentially dreary, but with a whiff of something deeply evil. Raphaël Pichon and his Pygmalion Orchestra performed as if their lives depended on it, with a solid cast trying to provide all the emotion that Miyagi’s chilling staging lacked. ★★☆☆☆

The boos and heckles that greeted Miyagi’s crew during encores were easier to understand than those at the end of Moses and Pharaoh Where Salomebut at least it’s reassuring to see that Aix is ​​ready to ruffle some feathers.

The festival runs until July 23 festival-aix.com

The endometriosis event of the summer: the warriors, a conc