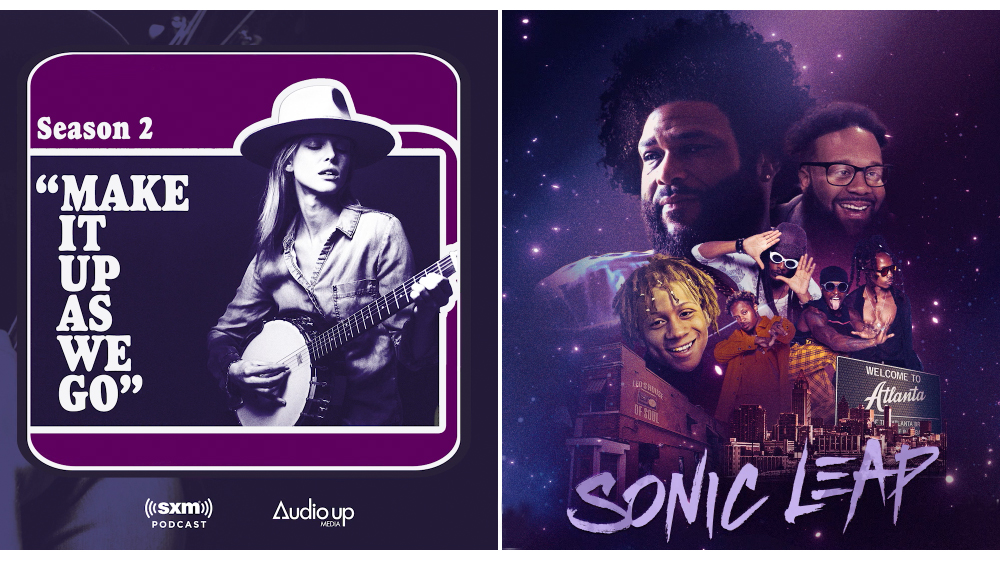 SiriusXM and Audio Up reveal a list of scripted podcasts

SiriusXM and Audio Up Inc., which in October announced creative programming and a strategic agreement that will see the development of new original scripted series and audio entertainment concepts, announced the launch of two original scripted podcasts, “Make It Up As We Go: Season 2,” starring Garrett Hedlund, Scarlett Burke, Elle King, Nile Rodgers, and Shooter Jennings, and “Sonic Leap,” starring Anthony Anderson, Trippie Redd, and Hero The Band. Both will premiere May 3, with previews scheduled for May 2 on the Volume channel, and can be heard across the SiriusXM ecosystem – including the SXM app, Pandora and Stitcher – as well as on d other major American podcast platforms.

The deal allows SiriusXM to have a first-look co-production option for original podcast concepts by Audio Up, the podcast production studio founded in 2020 by audio innovator Jared Gutstadt, as well as access to the catalog back of the studio.

The second season of “Make It Up As We Go,” billed as “the first-ever scripted country podcast musical,” continues to follow country star hopeful Charlotte Sayles (played by series co-creator Scarlett Burke, who also contributes original music) as she navigates her way through Nashville’s male-dominated hit factory. Songwriter Liz Rose, Kat & Alex, Breland, Abby Anderson and Chord Overstreet make appearances on the show, in addition to Hedlund, King, Rodgers and Jennings. Jennings is also co-producing the show’s soundtrack with Gutstadt. Promotion for the series will be heard on SiriusXM’s Outlaw Country and The Highway channels.

“Sonic Leap” tells the fictional story of rock band Hero the Band. Composed of four brothers, they were sent back in 1985 to “change their future and the future of music”. Alongside original music from Gutstadt, Jeff Peters and Hero the Band, actor Anthony Anderson (“Black-ish,” “Law & Order”) makes his podcast debut. Rapper Trippie Redd co-stars and also contributes music. Also on deck is a full album from Atlanta’s Hero the Band, to be released on Audio Up Records. Hero the Band appearances are scheduled on SiriusXM’s 1st Wave and Alt Nation channels and Trippie Redd will guest DJ on Hip-Hop Nation.

“These projects are a testament to our abilities as storytellers, songwriters and music producers,” said Gutstadt, Founder and CEO of Audio Up. “With SiriusXM, Audio Up has an alliance with a shared creative vision and an unprecedented opportunity for scale. The unique value of this collaboration will be vast: on SiriusXM, Pandora, Stitcher and beyond on other major audio entertainment companies, and also down the road as potential film, music and television franchises that will be unlocked through the power of audio first.”

Scott Greenstein, President and Chief Creative Officer of SiriusXM added, “Whether it’s SiriusXM radio hosts appearing in podcast episodes or stars of the show playing guest DJ on SiriusXM channels and presenting to millions of new listeners, we’ve created a one-stop launch pad for these great podcasts and the original music they contain.

Of “Make it Up As We Go”, Hedlund noted: “Happy to be with Audio Up again. I had my first number one podcast with ‘Strawberry Spring’, our Stephen King project. I was thrilled to returning to country music in season two of “Make It Up As We Go”; revisiting my love for the songs and tales that are dear to me. Scarlett and Jared have this incredible dynamic, and I love being in their world. Jared is a visionary when it comes to how music plays in the world of podcasts, and I think it’s one of the most unique spaces in media right now.

Anthony Anderson said of Sonic Leap: “I met Hero the Band on a Zoom call earlier this year when I was working on the project. They were late and I gave them shit! But for real, these guys really bring something new to pop music. It’s like Prince, Terence Trent D’Arby and Lenny Kravitz have four incredibly gifted and talented children. It’s the magic combination of rock, soul and psychedelic pop. The band tells their story with this thrilling time travel adventure. I’ve never done anything like this before, and I know I’ll be happy to say I know them from the jump.