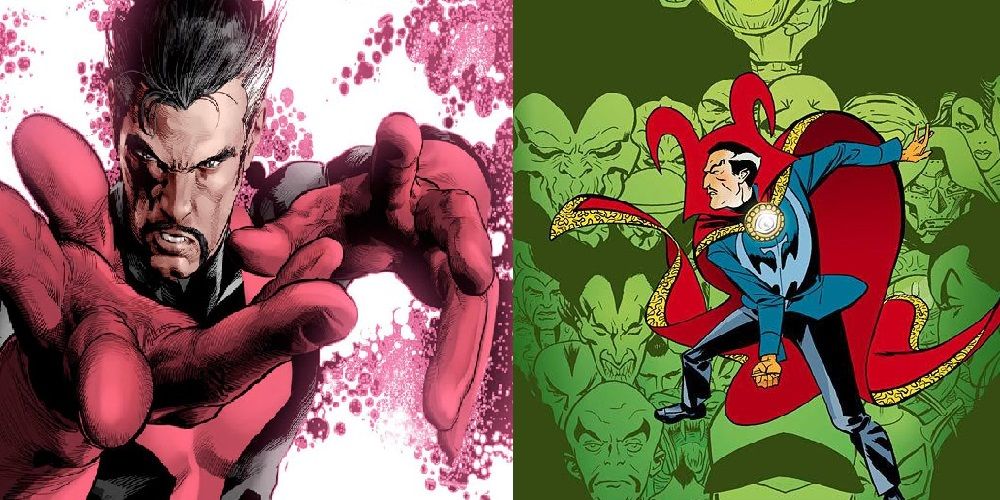 For nearly sixty years, Doctor Stephen Strange has operated using his particular brand of mystical arts. With Doctor Strange in the Multiverse of Madness tearing up the box office, it’s fun and important to revisit the foundations of blockbuster success.

RELATED: Doctor Strange’s 5 Best Battles In The MCU (& Who Won)

While words are an important part of comic book storytelling and characterization, art is considered by many to be the medium’s most crucial element. It is ultimately what separates the art form from prose, novels and film. The Sorcerer Supreme has been conjured by a host of talented artists over the years, and these are some of the best.

Humerto Ramos has been a staple of Marvel Comics for twenty years. With his unique approach to character proportions, Ramos has primarily been associated with Spider-Man in the past. However, his style also meshes very well with the otherworldly qualities of Doctor Strange.

Collaborating with Skottie Young, Ramos created the oft-overlooked gem Strange Academy. In the vein of Hogwarts and the X-Mansion, Strange Academy is a school for young and talented magicians from the Marvel Universe. In addition to the Sorcerer Supreme, the variety of characters like Doyle Dormammu and Guslaug the Frost Giant showcases Ramos’ strength.

Along with his wife and collaborator, Rachel Dodson, Terry Dodson has brought Marvel characters to life for decades. In 2011 Defenders, Dodson used a sleek new look for Strange by forgoing the Levitation Cloak. This appearance is actually analogous to Strange’s very first appearance.

RELATED: The 10 Best Marvel Board Games Ever Made, Ranked

Dodson’s capeless design has also been part of Marvel’s multimedia conquests. This look has appeared in several Marvel games as an unlockable costume often referred to as the “Defenders Costume”. Recently, Multiverse of Madness featured a similarly dressed variant of the Sorcerer Supreme.

Doctor Strange: The Oath is one of the most famous Doctor Strange stories, which is largely due to the wonderful line art. Writer Brian K. Vaughan has teamed up with artist Marcos Martin to convey this modern classic.

Readers might think Martin’s style is simple, but his mastery of Doctor Strange standards like Dormammu and even the Levitation Cloak proves that wrong. He also expertly portrayed a brilliant Doctor Strange dichotomy, balancing his city life with his interdimensional antics. Martin has since returned to Strange art with variant covers for 2021 Defenders.

Mike Deodato Jr. is a staple in the comics industry, especially among Marvel artists. Doctor Strange has passed through his talented hands several times with titles like Original sin and a decent piece of Jonathan Hickman’s seminal New Avengers. In an iconic scene from Original Sin, he pairs Strange with the Punisher as they investigate the death of an interdimensional monster.

Deodato has a knack for casting shadows on his characters’ faces. This was particularly effective with Doctor Strange, especially in some of the darker moments of New Avengers.

Mel Rubi only had a six-issue stint on Doctor Strange, Sorcerer Supreme, but around this time he co-created one of the coolest variations of The Good Doctor. In the series, a nearly helpless Doctor Strange creates two mystical constructs to act in his stead: Vincent Stevens and the being known only as Strange. For a brief period, Strange continued to fight alongside the Midnight Sons.

Created in the early 90s, Strange fits perfectly into the edgy darkness of that era. With his dark outfit and manipulation of green energy, Strange ended up looking almost like Marvel’s answer to Spawn.

Ron Frenz is very familiar with the drawing of the traditional Doctor Strange of Earth-616, but his designs of the planet Spider-Girl are his most interesting. In the pages of Marvel’s MC2 line, Stephen Strange has retired the Sorcerer Supreme title but still defends future Earth while sporting a magical white mustache.

Doc Magnus is the current Sorcerer Supreme of the MC2 timeline. Frenz’s design for him is simple yet effective, outfitting him in a black costume with a Necromancer-evoking mask. The young man’s graying hair also gives him something of a Grendel’s Hunter Rose aesthetic.

Geof Isherwood was a regular cartoonist on the Doctor Strange, Sorcerer Supreme series. During his run he co-created Necromancer, the Stephen Strange of Counter-Earth. This Stranger’s life diverged from the main continuity version when he killed his world’s Baron Mordo after Mordo murdered the Ancient One. Therefore, the necromancer takes a darker path and becomes obsessed with dark magic and world domination.

3 Jesus Saiz is a stranger to the stars!

With the years 2018 strange doctor relaunch, writer Mark Waid teamed up with the incredibly talented Jesus Saiz for the first arc: Sorcerer Supreme of the Galaxy. This storyline had Saiz summoning all sorts of cosmic situations for the mystical surgeon. Saiz only did interior art for the first five issues, but would remain on the covers for the vast majority of the series.

During his brief stint, Jesus Saiz was able to revamp a cool new outfit for the wizard. The polished black suit almost evokes Doc Magnus from the MC2 line. Saiz also put Stephen’s gray temples back in place rather than the lower MCU-inspired look.

After the well-intentioned atrocities Stephen and the Illuminati committed before 2015 Secret Wars, Doctor Strange needed new direction. With the All-New, All-Different relaunch, writer Jason Aaron has teamed up with Chris Bachalo to perform reconstructive surgery.

Bachalo’s Doctor Strange rolled up his classic long sleeves and dealt damage with the Ax of Angarruumus and other magical weapons. As the series progressed, Strange got a darker outfit and a fuller, messier beard, creating one of the more visceral interpretations of the character.

1 Strange would not exist without Ditko

More than Stan Lee, Steve Ditko is responsible for much of what Marvel fans appreciate in the master of the mystical arts. Without a mask or traditional superhero aesthetic, Doctor Strange was entirely unique to Marvel and closer to past mystics like Green Lama or Mandrake the Magician.

Of course, there’s been a lot of talk about Ditko’s amazing interdimensional art. His name has become as synonymous with spiritual and supernatural as Jack Kirby is with cosmic. Ditko’s beautiful use of perspective and form is still captivating today.