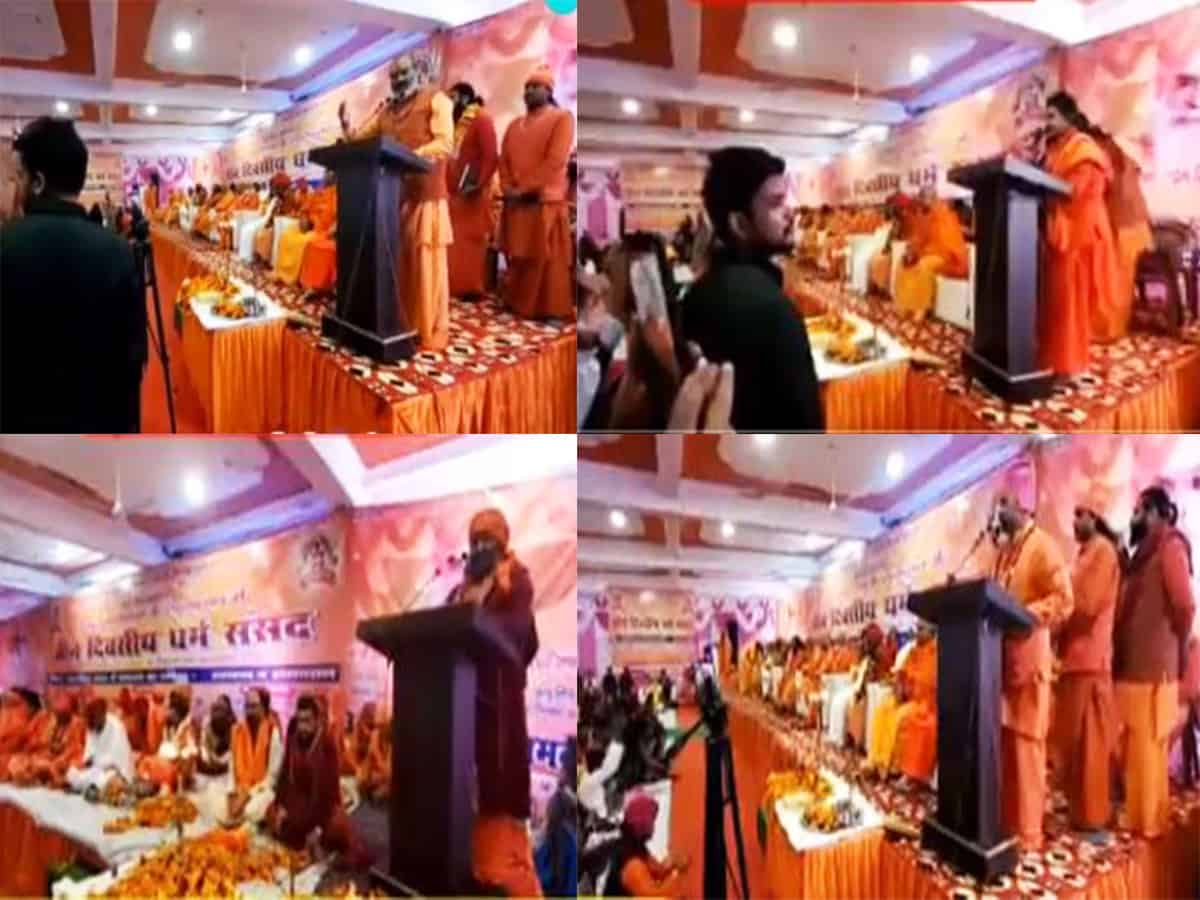 Months before the Haridwar ‘Dharam Sansad’ hate speech by various religious leaders, including Yati Narsinganand, (where he called on Hindus to wage war on Muslims), the agitator had featured in a music video that urged Hindus to do the same. The song is composed by popular Rajput-Hindu pop singer Upendra Rana, who considers Yati his mentor.

The clip was made with Narsinghanand’s approval and it was filmed at Dasna Devi temple in Ghaziabad in UP, where Yati Narsinghanand is the mahant. Yati Narsinghanand himself is also seen in the video, sitting in the background, clapping and enjoying Upendra Rana, the singer praises him for being the protector of Hindu Dharma.

His other songs tell of the valiant history of the Rajput warrior caste, which features Thakurs like UP Chief Minister Yogi Adityanath, and also calls to arms those who have forgotten their heritage”.

Rana as seen in his videos is a simple and modestly dressed man who is very famous in the Thakur and Rajput belt of Uttar Pradesh. He is considered to be the kind of pioneer of the “DJ Rajput song” genre, which is a subgenre of popular Hindu pop.

These music videos typically feature people wielding swords and guns, appearing ready to incite violence, apart from others performing bike and car stunts, and men flexing their muscles. What is also evident is the assertion of their caste dominance; Thakurs and Rajputs.

In a report by The Print, Rana said this popularity he has today comes “after years of struggle”. He says that at the age of fourteen he was influenced by the local folk singers – Ragini, they were performing in his village and he started taking music lessons with them. At the age of 21, he married and dropped out of college to pursue a career in music.

In 2007 he recorded his first music cassette with a local label and a decade later hooked up with a music company that had a YouTube channel. This move changed Rana’s life. His songs were widely shared and in 2019 he decided to branch out with his own channel called “Upendra Rana”.

The first song he downloaded did not perform well. Feedback he received from the young Thakur community was that no one listens to folk music anymore and he was asked to add a modern groove to his music, which included DJ beats and self-tuned beats.

It was a game-changer for the singer. Her next song “Thakur Kaum Badi Mardani” was a big hit and garnered over 50 Lakh views. He continued to use this formula and it worked well for him. It was followed by song after song, like “Hum Thakur Superstar”. which broke all its previous records with 220 lakh views.

What is Hindu Pop? And the rise of it

Hindu pop is a genre of music that talks about what a Hindu should be, what he should do, how Hindus should claim the country from Muslims, etc. with a touch of funky self-tuned and DJ beats.

Over the past fifteen years, the genre has become very popular and has become a tool for inciting violence and hatred against various communities, especially Muslims.

Some of the earliest Hindu pop songs that still remain popular today are “Agar Chua mandir to tujko teri aukat bata denge (If you touch the temple we will show you your place)”, a song is about inciting violence against the Muslims if they question or touch ‘the temple’.

These YouTube channels have a huge subscriber base and the songs have millions of views together. The music videos often have people wielding swords, guns, references to violence like lynching videos, the demolition of Babri Masjid and rock throwing videos from Kashmir.

Sandeep Acarhya (not to be confused with the singer of Indian Idol), originally from Ayodhya, considers himself the pioneer of Hindu pop. In a report by The Quint, he claimed he was the one who started these songs and made them popular.

He makes songs along similar lines, in which he calls for the rule of a Hindu Rashtra and open appeals against hatred and violence against Muslims. Some of his popular songs are “Makke Me Jal Chadunga Sawan Ke Mahine Me (will offer water to Makkah in the month of spring)” and “Bharat main jitne desh Drohi hain unki Maa ka B** ( F the mothers of people who are in India and against the country)”

It should be noted that these singers have no case or FIR against them despite the lyrics of the songs violating several sections of the Indian Penal Code (IPC) like IPC 153A – Promoting Hatred between Religious Groups, IPC 295A – Insulting Religion or People religious beliefs, IPC 505(2) – inciting enmity on religious grounds.

The genre and songs continue to grow today due to the constant release of songs on any given news issue. For example, a song was released recently on Mayur Music, a popular Hindu pop YouTube channel. It features “Hijab Hijab Kyun Karti Ho Jab rehti ho Hindustan main (why do you talk about Hijab when you stay in India)” along with several songs which were aired on this channel and other channels to celebrate Yogi Adiyanath’s victory in the recent concluded the election of the assembly of the UP.