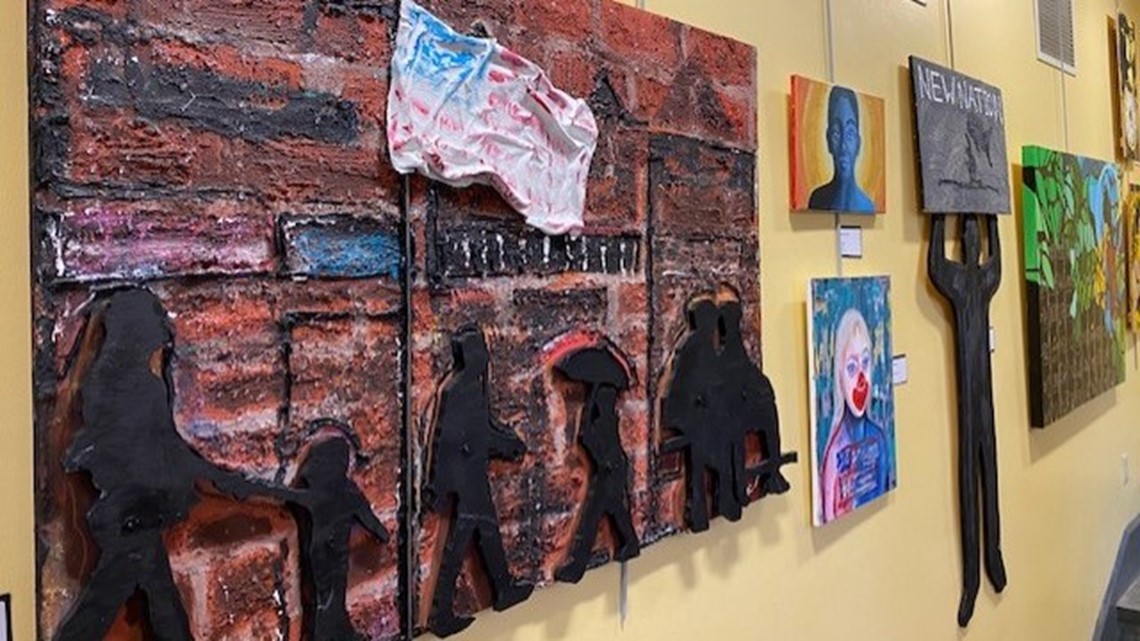 The eighteen artists featured in the new Indy Library exhibition

The artist collective Eighteen is featured this year in the Meet the Artists exhibition at the Central Library.

Indy has seen their work before. The eighteen artists helped paint the Black Lives Matter mural on Indiana Avenue in 2020. Like-minded artists focus on speaking out against racial injustice through their work. Now they’re showcasing their art at the Meet the Artists 2022 exhibit at the downtown branch of the Indianapolis Public Library.

“It was one of the best pieces of art I’ve seen, but there was no exhibition. I didn’t hear about it on TV or radio or read about it at this time. It was pretty good for doing Black History Month,” founder and curator Anthony Radford said. “Here we are, 34 years later, this is probably the biggest exhibit of African-American artists in town right now. Bringing light to African-American artists and that’s what this show is all about. exhibition for 34 years.”

Gary Gee has three works of art in the central library.

“I guess I’m a lifelong artist,” Gee said. Since I was 4 or 5 years old, I was drawing and everything. When I was in sixth grade, my mom decided to give me a real art kit.”

After graduating from the Herron School of Art and Design, Gee now teaches. He said art can be a release for people – a way to convey messages emotionally, culturally and creatively.

“My heart is paid. So, I love it,” said Deonna Craig, president of The Eighteen Art Collective. “I share my first thoughts, and throw in a little color, then maybe a few words, just to jog my memory or start a conversation when viewers see it.”

One of Craig’s pieces is hieroglyphs.

“I kind of wanted to tell an origin story, and the three pieces I did are teachable moments. So we can talk about history,” Craig said. “We just want to bring people together in the name of art.”

With 18 artists featured in the exhibition, Gee said his work needed to stand out.

“I saw this kid on a rainy day. He was walking really majestic. He was wearing a suit, a turban and an umbrella, and it was raining,” Gee said. “Something about this kid was like, this is going to be a play, and I just sketched it on the canvas and let it come to life on its own.”

“Just kind of stop, pause and take a moment to engage in it and see what you see sometimes,” Gee said.

Craig said she hopes to close gaps in equity and racial justice through her work.

“I want people to walk away with, ‘Why am I feeling what I’m feeling and what am I doing to improve the community alongside these artists?'” Craig said.

The exhibition will continue until April 2.