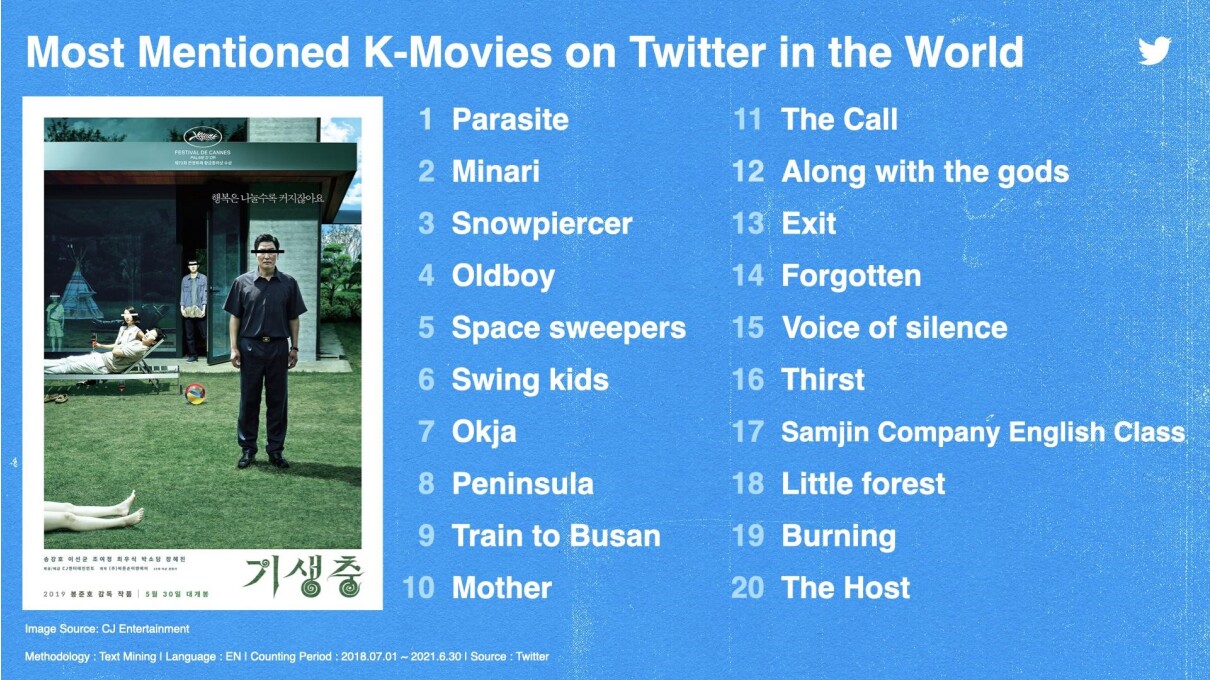 Twitter announced ‘#BeyondKpop: Globalization of K-culture from Music to Drama, Webtoon, Movie and beyond’, at MU: CON 2021

SEOUL, SOUTH KOREA – Media OutReach – October 1, 2021 – Speaking at MU: CON 2021, YeonJeong Kim, Head of Global K-pop and K-content Partnerships at Twitter, presented big data information with the theme of ‘#BeyondKpop: Globalization of K-Culture from Music to Drama, Webtoon, Movie and Beyond’, and Top 20 Most Tweeted K Content. Twitter has been at the center of global conversations on the K-pop music scene, and YeonJeong’s new announcement reflects Twitter’s effect on the global delivery of various K-content like popular Korean dramas, webtoons and movies as well as the K-pop music.

The data aggregation results were driven by Twitter and the company VAIV through large text mining techniques that analyzed global English Tweets from July 2018 to June 2021.

Image Description: Top 20 Most Mentioned K-Dramas On Twitter Around The World

For many K-pop fans, K-dramas were the next type of K-content they tried after falling in love with K-pop, and the most popular K-dramas reflect that preference.

Image Description: Top 20 Most Mentioned K-Webtoons On Twitter Around The World

With K-pop music reaching unprecedented heights and the popularity of K-dramas increasing as a result, there is also growing interest in the original K-webtoons, especially in webtoons that have been turned into K-dramas.

Image Description: Top 20 Most Mentioned K-Movies On Twitter Around The World

Only three directors represented 9 of the top 20 most mentioned K movies on Twitter.

Parasite, directed by Bong Joon-ho, was the most mentioned K movie on Twitter, but Bong’s other movies, Snowdrops, Okja, Mother, and The host, all were in the top 20. Directors Park Chan-wook and Yeon Sang-ho also represented two K films each, with Old boy and The thirst, and Peninsula and Train to Busan, respectively.

K-content will continue to grow

Yeon-jeong Kim, Head of Global K-pop and K-content Partnerships at Twitter, said, “Twitter has proven that K-pop, along with many other fandoms, thrive on Twitter’s characteristics: live, public and conversational. People consume K content through a variety of channels, but at the end of the day, conversations happen on Twitter. K content has unlimited potential as the fandom culture that started with K-pop took an interest in other forms of Korean content, which led to the spread of the culture. Twitter will be fully dedicated to supporting the globalization of K content and the fandom it strengthens.

MU: CON 2021 celebrated the 10th anniversary of Asia’s largest global music market event hosted by the Ministry of Culture, Sports and Tourism and the Korea Creative Content Agency, aiming to help Korean musicians to advance in the world market. In addition to Twitter, the MU: CON 2021 conference included speeches from Harvard Business School Professor Anita Elberse, Billboard columnist Jeff Benjamin and singer-songwriter Jenna Andrews (songwriter for BTS ‘Butter’) , as well as other famous personalities from Korea and the rest of the world.

Twitter is what’s going on and what people are talking about right now. To learn more, visit about.twitter.com and follow