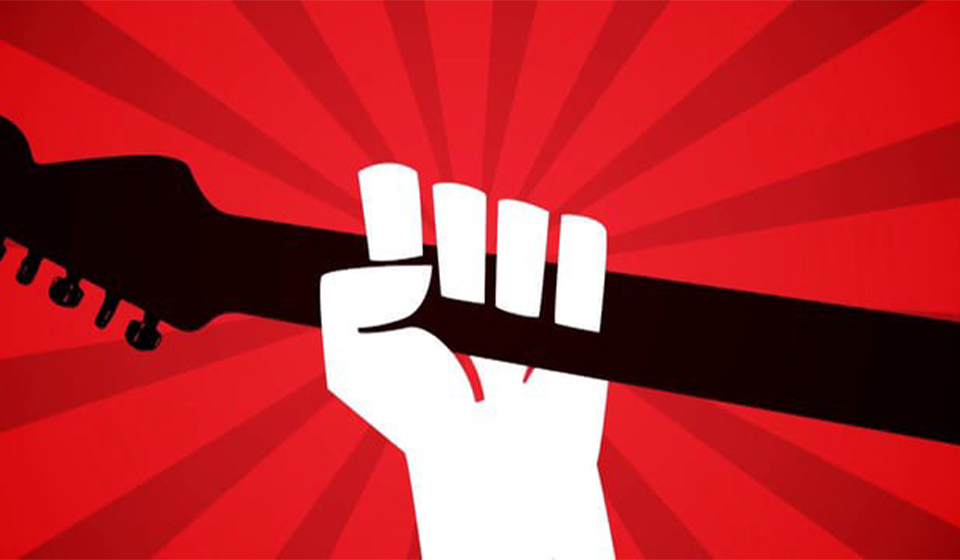 What do the songs have to do with politics and the public? – myRepublic

Songs are the most powerful vehicle for spreading different messages in societies around the world. The melody and meter they have easily draw the attention of listeners/audiences to the message they are conveying. Therefore, a song can influence people with the message it conveys easily.

Songs fuel feelings. Songs are like stimulants and/or catalysts. Religious leaders, politicians, revolutionaries, statesmen, aristocrats, social activists, etc. have appropriated the songs to defend their mottos throughout the history of human civilizations. They energized people with their consort of songs. For example, many songs have been composed to support and accelerate the spirit of various social and political movements/campaigns in Nepal and abroad for the cause of social, cultural, political and religious ‘transformation’. Different forms of songs are also used in today’s world to energize, motivate and “angelize” people. “Groups seeking civil rights and worker protection have frequently used songs as a means of building solidarity, conveying their message, and moving their grievances and goals from the streets to the halls of government (JA Leo Lemay, 1976 ).

More often than not, the general mass of people believe that songs are synonymous with entertainment and amusement; the songs carry the sorrow and the sufferings, the pleasure and the pains of humanity. It’s half true; they still don’t. Songs and politics have a strong connection. The connection between music and politics, especially political expressions in songs, has been observed in many cultures. Music can express anti-establishment or protest themes, including anti-war songs, but pro-establishment ideas are also represented, for example, in national anthems, patriotic songs and political campaigns (John Street, 2003).

In fact, the songs instill a certain belief in you without knowing it, sometimes resulting spontaneously in a point of view developed in you which stimulates to point in a prescribed direction or to strongly feel/’realize’ something. This uplifting power of a song makes us feel liberated or opposed. The songs were therefore used to materialize vested interests on the intuition of people in power and/or people without power. Many popular songs from the Panchayat era could therefore have been banned for this reason. Now, let’s say, at this point, the songs stimulate us. Either way, the songs are semiotically and aesthetically open; even a musically illiterate person is able to grasp the rhythmic structure and flow of any song. They can interpret and enjoy the songs in their own way. People feel the music; music is everywhere.

Literature is considered the mirror of society. There are different genres in literature. The song is one of them. It is the product of contemporary societies. It brings the content of the context in which it exists. Authors reflect societal values ​​and the realities of literary genres. The reflection is subject to the perspectives of an individual author. The content of literature thus naturally becomes the subject of criticism and appreciation.

In general, literature most often deals with taboos, stigmas, superstitions, discriminations, political and cultural issues that exist in societies. It circumvents them through different literary genres for the progressive development of society. It is a facilitating function of literature. Literature, at this stage, becomes useful in enhancing social solidarity, social harmony and social development. Whereas literature is not always a facilitator; it can sometimes distort social needs, values ​​and realities; then, at that moment, it can trigger conflicts and chaos, and new discourses in societies. Such literature can then be stamped as “bad literature”.

Songs are the most powerful vehicle for spreading different messages in societies around the world. The melody and meter they have easily draw the attention of listeners/audiences to the message they are conveying. Therefore, a song can influence people with the message it conveys easily. If a song has a “positive” message and has represented the factual societal conditions, it rekindles the positive energy resulting from social solidarity, social harmony and social development; it can accelerate the pace of social transformation as a whole. On the other hand, if a song has misrepresented social needs, facts, and values, it can lead society to disorder and stagnant conditions, because misrepresentation always misleads people and society.

Questions are easily asked about the content of a song if it becomes the prospect of a discord of discussion such as: whether the song represented societal realities in a factual sense? Does the song have social, political, sexual, religious prejudices? Does the song convey the pleasures and pains, and needs of people and society today? Based on these parameters, lyricists should think before a song is released. These settings can provide information for lyricists to review their creation before it is published and reviewed. An artist can also review their creation on the purpose they set behind the creation of any work of art/literature. But this does not mean that authors necessarily adopt and adapt the forms and contents of the literary/artistic creations of contemporary societies, because literary works are both factual and fictional.

4 Steps Any Musician Can Take to Organically Grow an Audience