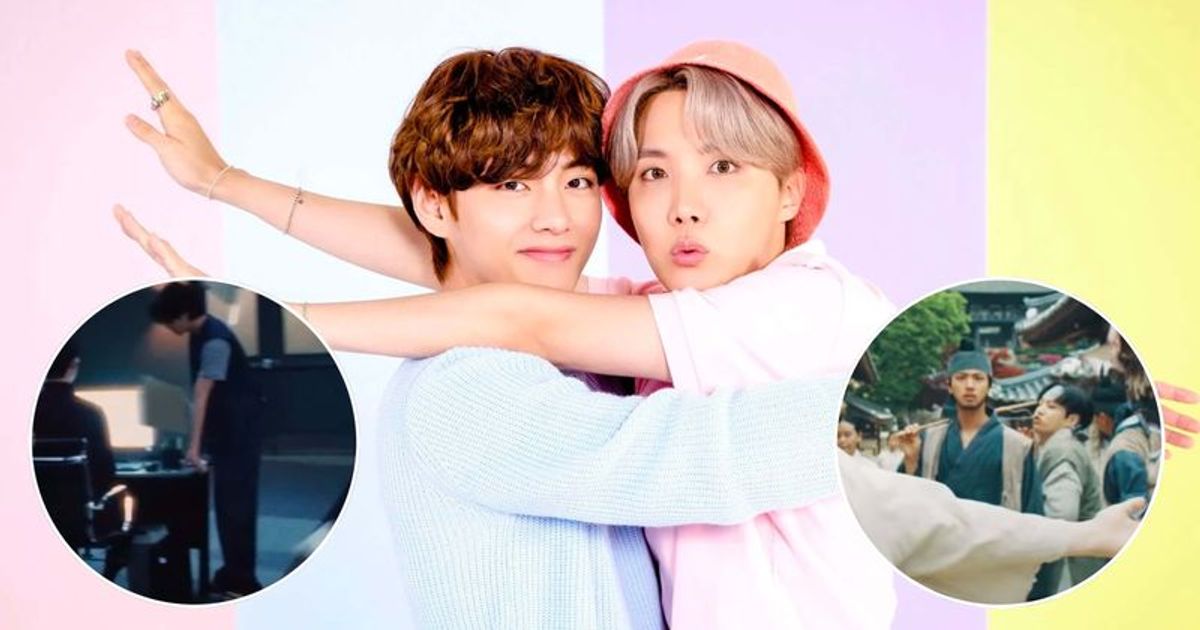 BTS has become one of the biggest boy groups in the world and every time they collaborate with other artists, it’s big news. But even though they’ve featured artists like Nicki Minaj, Halsey, and Coldplay in their popular music videos for ‘Idol,’ ‘Boy With Luv,’ and ‘My Universe,’ respectively, BTS has always preferred cameos from their own group members. for their songs and solo mix-tape videos.

It looks like BTS’s ‘Chapter 2’ also intends to ‘keep it in the family’. In the most BTS fashion ever, J-Hope’s single ‘More’ topped iTunes charts worldwide in 84 countries while the music video started trending on YouTube in South Korea. But it was the music video that had fans theorizing about a subtle “blink and you miss” cameo from V (aka Kim Taehyung). After all, the activity of BTS members performing in each other’s songs began with BTS J-Hope’s 2018 release “Daydream,” which featured V in a short cameo. Although the single had a music video, it was never considered the rapper’s first solo as the song was only part of his mixtape which was released online. Now, fans are wondering if all of the upcoming BTS member solo songs will also have similar surprise cameos from the BTS members themselves.

As soon as the music video for “More” was released, fans started talking about how Taehyung aka V made a special appearance in J-Hope’s video for the second time. In one of the music video’s many freeze-frame scenes, BTS V appears in the gray but chaotic office crowd. Among the many office workers, V is not looking at the camera and his face is covered by his falling hair. But since fans can even identify the silhouettes of BTS members, they were quick to confirm that the office worker on the right side of the frame was none other than Kim Taehyung, especially since he was wearing her casual slippers.

But V isn’t the only BTS member to make an appearance in a BTS member’s solo music video. In 2020, Suga released his second mixtape, “D-2” with a music video for the single “Daechwita”. Suga’s music video featured BTS’ maknae Jungkook and the boy band’s fake maknae Jin, dressed as peasants at a flea market as the duo channeled their usual chaotic on-screen feuds after bumping into Suga. The cameo was a hit among fans and now this new special V appearance has fans hoping that with the BTS members’ solo debut, they will be able to see a lot of member cameos.

Fans are now discussing the chances of having more BTS member cameos in everyone’s solo videos. One fan said “Tae cameo in Daydream🤝 tae cameo plus” Another fan said “I bet he come early to shoot his cameo for rapline MV but late for rapline MV BTS.” Another fan said, “Armys: *sniffles* bangtan takes a break *sniffles* they’re going to focus on their solo albums *cries* and they’re kinda going to be apart for a while *sobs* while bts make an appearance in each member’s mv…”

Another fan said, “Antis and solo stans swear they celebrated ‘bts solo’, ‘bts break’, ‘bts hiatus’, ‘bts d***and’ and that’s just the mv solo from the first member and there is already a cameo from another bts member sksjjss istg i love them so much they will stay with eo no matter what.” Another fan said, “What if every bts member had an appearance in every single solo project of every single one of them.. like jk & jin is daechwita then speculation na if tae yung nasa mv ni hobi.”

Another fan said, “AHHH WHAT IF BTS MEMBERS APPEAR IN EACH OTHER MV AHHHHH.” One fan theorized, “In the office scene, the light projected from the window is the ARMY logo, j-hope throws some papers and it looks like Tae has made an appearance. His different worlds and characters may clash but coexist .”

what if every member of bts has an appearance in every single solo project of each of them.

antis & solo stans swear they celebrated “bts solo”, “bts break”, “bts hiatus”, “bts d***and” and this is only the solo mv of the first member and there is already a cameo from another bts member sksjjss istg i love them so much they will stick with eo no matter what 🥺

ARMYs: *sniffles* Bangtan takes a break *sniffles* they’re going to focus on their solo albums *cries* and they’re kind of going to be apart for a while *sobs*

meanwhile, bts makes an appearance in each member’s mv… pic.twitter.com/hi6y5Du2Zw

AHHH WHAT IF BTS MEMBERS CAMEO IN EACH OTHER MV AHHHHH

Completely original. Intense but still with playful and meaningful notes. In the office scene, the light projected by the window is the ARMY logo, j-hope throws some papers and it looks like Tae has made an appearance. Its different worlds and characters can clash but coexist.

BTS revives the debate over military service in South Korea